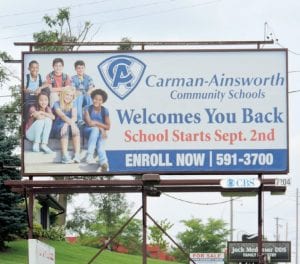 Carman-Ainsworth Schools is trying out a different form of new media this year. Two billboards have been put up to encourage enrollment. One at Corunna Road between Diamond Ave. and Dutcher St. is to remind parents that school starts Sept. 2 and to make an effort to pre-enroll their children.

“When parents wait until after school begins to enroll their children, it can result in students missing the first few days of school. This is not the best way to begin the school year,” said David Swierpel, C-A director of professional learning and community services. “ The enrollment process requires (by state mandate) providing proof of various immunizations and other documentation. Parents often need a couple of days to gather the appropriate documents resulting in a further delay to their child beginning school.”

Swierpel cited research on attendance which clearly showed that students who miss more than 10 percent of the school year (about 18 days) are at greater risk for lower math and reading performance.

“Students begin learning the first day of school and it is important that they begin on time and ready to learn,” he said.

The billboard is scheduled to be up until Sept. 14.

C-A also has a second billboard on Miller Road at I-75 facing south. It informs parents about a fee-based community education Pre-Kindergarten early childhood program. This program is open to anyone and is located at C-A’s Learning Community building,

1181 W. Scottwood Avenue, near Fenton and Bristol Roads. This feebased program is aimed at parents who do not qualify for Head Start which has income-based guidelines for enrollment, Swierpel said.

C-A Superintendent Steve Tunnicliff added that the billboards are not intended to woo students away from other districts. The Schools of Choice application period for this year is closed, he said. — Rhonda Sanders