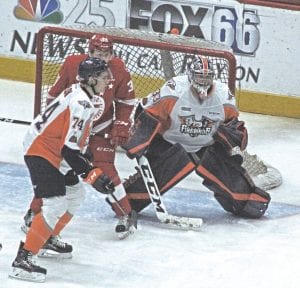 FLINT – Although the Flint Firebirds were flying high after finally snapping a nine-game losing skid, a three-goal streak by the visiting Erie Otters doomed the Firebirds in a 5-2 loss Saturday during Ladies Night. Erie, the reigning OHL champs, registered the only goal of the opening period after Ivan Lodnia put it on the board.

Flint drew even near the midway point in the second period, which was netted by Nicolas Mattinen. However, the joy didn’t last long. Just two minutes later, Owen Headrick took the lead back for the Otters, and a minute after that, Jordan Sambrook made it a 3-1 lead for Erie to end the second period.

Erie rode the momentum into the third, which Maxim Golod capitalized on in the first five minutes of the period, upping the lead to 4-1. Ty Dellandrea buried one for Flint to chip away at Erie’s lead, but a Taylor Raddysh empty net goal in the final minute put the game on ice.

Sunday’s home game against the Owen Sound Attack had many ups and downs, but Flint came out on the wrong end of a 6-4 battle.

Owen Sound scored first on a Nick Suzuki goal, which was answered by a pair of tallies from Kyle Harries and Ryan Moore to put the Firebirds in front with a 2-1 advantage after the first period.

Things changed in the second as Suzuki scored again and Chase Campbell added one to put Owen Sound up 3-2. Moore added another to tie the game before the third, but the Attack took control in the final frame. Goals from Maksim Sushko, Suzuki and Daylon Groulx made it a 6-3 lead for the Attack. Ethan Keppen added one for Flint, but it wouldn’t be enough.

Flint is just now getting back some key components who were competing for Team Canada at the World Under-17 Challenge Nov. 5-11, which caused them to miss five Firebirds’ games. Perhaps most key was head coach Ryan Oulahen being a part of that. He was joined by forward Ethan Keppen and goaltender Luke Cavallin.

Cavallin had a 3-1 record prior to the gold medal game, which was won by the United States, but still earned a silver medal. Keppen registered four points in six games, including a goal.

The Firebirds remain in fifth place in the West Division at 7-12-2-0 for 16 points. Flint will now host Saginaw today, travels to Saginaw on Friday and then hosts Kingston on Sunday.