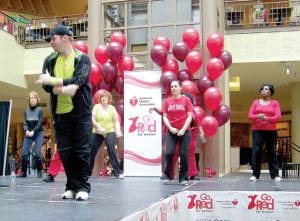 Zumba fitness exercisers rock the stage at center court, flanking a symbolic red dress designed by Irina Shabayeva, the winner of “Project Runway” Season Six which is being sold at Macy’s. The department store is a national sponsor of Go Red for Women and contributor of more $24 million dollars to the cause since 2004.

FLINT TWP. — Changing outfits four times in 30 minutes is enough to speed up anyone’s heart rate, but Maxine Sissons, 72, of Swartz Creek didn’t miss a beat as one of the models in a fashion show at Genesee Valley shopping mall. It was part of the fourth annual Go Red For Women event in support of the American Heart Association.

It’s only been about nine weeks since Sissons suffered a massive heart attack, went into cardiac arrest multiple times and required three stents to repair her heart in a life-saving surgery at Hurley Medical Center.

“I am glad to be here today,’’ Sissons said at the mall event targeting women though many men also took part several free health screenings sponsored by Hurley.

“We came up with the idea because of February being Heart Health Month,” said Kristen Cassabon, mall marketing manager. “We thought it would be neat to do a red fashion show. The concept grew from a fashion show to what we now call the health and fashion affair.’’ 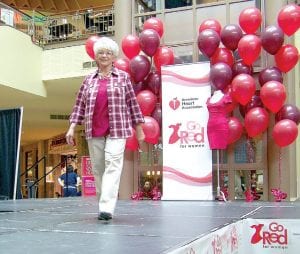 It is common misconception that mostly men have heart attacks, Cassabon said. Rather, the AHA identifies heart attacks as the number one killer of women in America.

Sissons attack on Dec. 2 started with sweating, nausea, chest pain and other common heart attack symptoms, she said. Rushed to Hurley Medical Center, her doctors found that she had 100 percent blockage in one artery and 99 percent in the other, she said.

Survival stories like hers were being sought during the mall event at a Go Red Casting Call, a nationwide search by the AHA to find real women heart sufferers whose stories will be showcased in a national promotional campaign.

Ida Johnson, 62, of Flint, also came to try her luck at the casting call. Johnson shared her personal story in a two-minute videotaped interview. She underwent open heart surgery in 2003 to replace an aortic valve that had been faulty most of her life. Johnson said she didn’t take early diagnoses seriously for many years until her cardiologist told her the nearly closed heart valve required immediate surgical repair or she might soon die. She underwent a 6 1/2- hour surgery at the University of Michigan Medical Center in Ann Arbor while a machine kept her heart beating. Recovery was tough at first but Johnson said she challenged herself to keep going by remembering how much she had to live for.

Her replacement valve is expected to last 10 to 20 years before she will need a new one, she said.

Johnson said she came to the Go Red event to share her story with women and men. She offered this advice: “Do not under any circumstances ignore the signs. Mine was pretty much a birth defect but it could have been fatal for me. Listen to your body, exercise, get regular checkups, strive for a healthy diet, get lots of rest and reduce stress as much as you can.’’

After the videotapes are reviewed, one casting call winner will be chosen to go on to compete at a regional level in late February, said Stacy Sawyer, director of communications for the American Heart Association covering Flint, Saginaw, Lansing and Bay City. Regional winners will vie in late April for one of five national top spots.

The mall’s center court was a beehive of activity with several exhibits and demonstrations surrounding the stage, giveaways and a grand prize raffle .

At another station, Chris Lee, a regional vascular technologist, conducted an ankle-brachial index (ABI) exam on participants who were required to lie down and remove their shoes. The exam compares blood pressure in the legs to that in the arms and is meant to detect blockages in leg arteries — an indicator of Peripheral Arterial Disease (PAD). Leg problems indicate possible problems elsewhere in the body and should be followed up with a full physical exam, Lee said.

Demonstrations included CPR, beauty tips and Zumba, a dance-based exercise craze that kicked off “flash mob’’ performances throughout the mall by the energetic exercise enthusiasts.