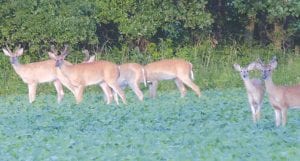 The Dept. of Natural Resources and Environment suggests that this could be a boon season for hunters in all segments of deer hunting. Michigan offers segments of deer hunting that includes the early season, the annual youth and disabled weekend, bow season that opens on Oct. 1, and the big daddy of them all, the Nov. 15 firearm opening day.

“Prospects for the fall big game hunting seasons are excellent as seasons remain long and bag limits and/or hunting opportunities have, in several cases, been increased,” DNRE officials across the board say.

The deer management group noted that hunters need look no further than the state’s favorite game animal, the white-tailed deer, to see the changes that could give many more opportunities for success.

The biggest change came last season when crossbows were allowed under restricted guidelines. This season, based mainly on the success of hunters who tried the new firearm, liberalization of crossbow regulations have been approved for this season by the Natural Resources Commission.

Because of the improved and more open use allowed, the state saw a big jump in the early archery deerhunting season last year. Crossbows are legal to use during any firearm season.

“As hunting activity increased dramatically during the early archery season, the Natural Resources Commission voted to further liberalize crossbow rules,” said officials with the DNRE. “This year, the minimum age was dropped from 12 to 10 and all hunters statewide can use crossbows during any season except for post-Nov. 30 hunting in the Upper Peninsula. Hunters are reminded, however, that if they do pursue game with a crossbow, they must obtain a free crossbow stamp from any license dealer or on-line.”

Also, because of the health and large number of antlerless deer in the Lower Peninsula in particular, there is no limit on the number of deer licenses hunters may buy in most of southern Michigan (Deer Management Units 041 and 486) or in the tuberculosis area (DMU 487). Also new this year, hunters in DMU 487 will be allowed to tag an antlerless deer with a buck tag during firearms seasons.

As far as the limited-access hunts, youths and disabled veterans will be afield Sept. 25-26, and youth may also hunt antlerless deer Sept. 21-24 in DMUs 041 and 486. An additional firearms hunt is slated for disabled hunters Oct. 14-17. The rest of us can begin our pursuit today taking out the overpopulated does while helping the state balance the management goals for the state’s whitetailed deer population.