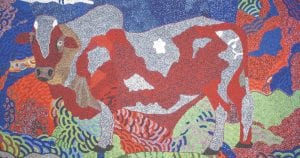 An example from Ubuhle Women: Beadwork and the Art of Independence.

FLINT – The Flint Institute of Arts begins its 90th year with the Jan. 21 opening of Ubuhle Women: Beadwork and the Art of Independence, which showcases a new form of bead art, ndwango (“cloth”), developed by a community of women living and working together in rural KwaZulu-Natal, South Africa.

The plain black fabric that serves as a foundation for the beadwork is reminiscent of the Xhosa headscarves and skirts that many of them wore growing up. By stretching this textile like canvas, the artists use colored Czech glass beads to transform the flat cloth into a contemporary art form of remarkable visual depth. Using skills handed down through generations, and working in their own unique style “directly from the soul” (in the words of artist Ntombephi Ntobela), the women create abstract as well as figurative subjects for their ndwangos.

Ubuhle means “beauty” in the Xhosa and Zulu languages and describes the shimmering quality of light on glass that, for the Xhosa people, has a special spiritual significance. From a distance, each panel of the ndwango seems to present a continuous surface; but as the viewer moves closer and each tiny individual bead catches the light, the meticulous skill and labor that went into each work—the sheer scale of ambition—becomes stunningly apparent. A single panel can take more than 10 months to complete.

Migration has defined the history of modern South Africa. The late-19th-century discovery of gold and diamonds—and, to a lesser extent, the cultivation of sugar cane—transfigured South African society with its demands for a large, flexible workforce of able men. As workers left their homesteads in rural areas to earn money, traditional social systems based on direct production from the land began to change. Low pay and harsh working conditions forced many cane cutters to live apart from their wives and families, which led to a breakdown of family life. Ubuhle was conceived in response to this social and cultural transformation. Established in 1999 by two women — Ntombephi “Induna” Ntobela and Bev Gibson—on a former sugar plantation in KwaZulu- Natal, Ubuhle began as a way of creating employment for rural women by combining traditional skills and making them profitable. By incorporating a skill that many local women already had—beadwork, a customary form of artistic expression for generations of South African women—and teaching it to those who did not, they began to provide women with a private source of income and a route to financial independence.

Since 2006, the Ubuhle community has lost five artists to HIV/AIDS and other illnesses, nearly halving the number of active artists. Thus, many ndwangos function as memorials to Ubuhle sisters who have lost their lives. Remembering the dead is a key motivation for the creation of many of these artworks, and it imbues them with a spiritual significance.

The Ubuhle community exists mainly to the determination of two women, Bev Gibson and Ntombephi Ntobela, who co-founded Ubuhle in 1999. Ntombephi is a master beader from the Eastern Cape whose tremendous skill, both as artist and teacher, has been the foundation block of this community. Ntombephi is known as “Induna,” which means “leader,” a term of great respect in South Africa, and it also suggests the responsibility she feels for the community as guardian of its future. Bev does not bead, but she has created the space for Ubuhle artists to explore, experiment, and transform the traditional art form. Bev has also been a source of energy and persistence in the emergence of Ubuhle’s growing vision.

Ubuhle Women: Beadwork and the Art of Independence runs from Jan. 21 through March 31.