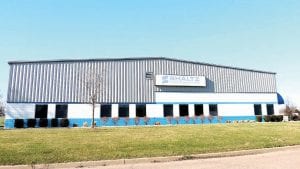 FLINT TWP. — The township Planning Commission recently approved a site plan for Shaltz Automation to build an addition to its existing facility at 5190 Exchange Drive.

Plans call for adding 10,000 square feet to the north side of the 18,000 square-foot facility to accommodate a growing assembly business.

“It is a good problem to have,’ said Mike Pifer, of Kraft Engineering & Surveying, who presented the site plan to the commission.

Shaltz has been in business since 1976 and was initially localed on the west side of Dye Road between Miller and Lennon Roads. He moved to Dye Road in Commerce Park in 2000 and by 2012 had outgrown that building. He moved into his currently facility, formerly Sherwin Williams, in 2012 but is out of room again.

Owner Phil Shaltz said he has added another service to his core automotive parts business and needs more space to accommodate it. He said he recently hired six more people and expects eventually to hire ten more.

Pifer said the building addition would be consistent with the existing building in terms of materials and appearance. Some landscaping is planned. Eight parking spaces will be added a new truck loading dock driveway. The addition will be mostly an open space with an office and new bathroom added.

Shaltz also is working with the township building department on securing a tax abatement for the business, said Tracey Tucker, building director. He had been considering moving the business to Oakland County.

Planning Commissioner Chairman Larry Ford said he was glad that Shaltz chose to remain in Genesee County. It is important for the township to be viewed as business friendly, he said.

“This is a dog eat dog world we live in,” he said, commending Tucker for her work offering incentives to small business owners.

“They are very surprised that we help them,” she said “They act like you are a miracle worker.”

Phil Shaltz was the creator behind the mysterious Blueberries billboard and subsequent community improvement efforts that launched in 2013.