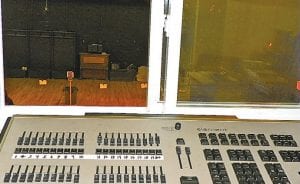 A view from the lighting loft to the new main floor staging area.

FLINT TWP. — When the curtain rises Sept. 13 on opening night of the musical “Cabaret,” it will signal not only a new season but a new existence for the esteemed Flint Community Players theater company.

With the completion of an addition to its headquarters at 2462 S. Ballenger, FCP is ending a 40-year run at Bower Theater in the Flint College and Cultural Center and moving into its own self-contained facility.

For the start of its 84th season, FCP will be housed completely under one roof including ticket sales, concessions, performances and back of the house functions such as costuming and props.

The recently completed building expansion includes adding a 30-foot marquee sign out front to promote events, three spacious dressing rooms that each will seat 12 to 14 people and a flexible staging area to accommodate different types of presentations.

“We are not going to limit ourselves to just theater,’’ said Steven J. Mokofsky, FCP executive artistic director since 1990. “We will make this into a performance arts facility as opposed to just a theater.”

Before the building housed FCP’s rehearsal hall. The expansion added the flexibility of a movable stage.

Flexible seating will be offered to accommodate about 170 people which was a typical audience size at Bower but Mokofsky now has the flexibility to add more shows if needed.

“At Bower, we were subject to a specific schedule,’’ he said. “ I could never add to it or change it once I went to contract.

Now if I am selling out a show and I want to add another one, not only can I but I will, I will make sure you see my show.”

It is the second expansion for the Ballenger road site. The first one completed circa 1992 added the rehearsal hall, a kitchen laundry room, costuming area, offices and a foyer.

FCP started out on the site in one small room – a former transmission shop – donated by arts supporter Bill Ballenger. They soon outgrew that and added another room for building props. The 1991 expansion alleviated serious crowing problems.

“I don’t know how we existed,” Mokofsky said, while showing the two rooms occupied before the first expansion.

“We were bursting a the seams.”

FCP traces its roots back to 1927 started by theater aficionados who went on to pro- fessional careers in n New York and Los Angeles.. FCP moved from performances in homes to churches and schools before settling in at Bower Theater in the 1970s.

There’s still much to be done to get the newly-expanded facility ready for opening night. That includes adding a concession stand and converting old dressing room into a comfortable “green room” area for cast members waiting to go on stage.

In between build outs and layouts ,Mokofsky will also begin holding auditions for “Cabaret” on July 9-10 from 7- 10 p.m.

Also a memorial garden and landscaping will be completed outside.

“We are making history,” Mokofsky said. “This is our inaugural season in this space. You are going to want to be a part of history in the making.”

Mokofsky credits fundraising and execution of the expansion to two diehard supporters Rita Vater-Darnton, chairman of the board, and Arden Irwin, member of the board of trustees.

“This is so proactive and a huge step in the right direction for audience comfort and accessibility,” Mokofsky said of the renovated facility.

The improvements will afford audiences better lighting, acoustics to hear and see better. The walk from the parking lot is shorter and the facility is close to Miller Road restaurants for those who like to dine out before attending the theater, Mokofsky noted

FCP is the third oldest in Michigan consistently running, including during the world wars, he said.

FCP is planning an open house on Sept. 9. from noon to 3 p.m. for the public to come and see the new facility.