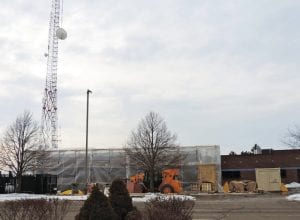 The 911 communications center on Corunna Road is being expanded to add City of Flint dispatch.

FLINT TWP. — The Genesee County 911 Communications Center on Corunna Road, which also houses a Michigan State Police Post, is being expanded to make room for the addition of City of Flint 911 operations.

Construction started in late fall and is expected to be finished by the end of March with all operations up and running by July 1, said Lloyd Fayling, director of Genesee County 911.

The completed merger will bring all county emergency response under one roof except for the city of Fenton. Flint split off from the county operation in 1996 when it moved to the current building, Fayling said.

The county 911 Consortium purchased the building a few years ago. Off and on talks about bringing Flint 911 dispatch back into the fold came to fruition last year when the city manager approached the consortium with a proposal aimed at saving money, Fayling said.

Flint has agreed to pay about $325,000 of the $1.2 million cost of the expansion project which includes raised computer flooring, additional radio consoles, add-ons to the telephone and radio systems and furnishings.

The portion of funding normally sent to Flint will now come to the county operation.

Fayling estimates that the county dispatch staff will be expanded about 12 to 14 people. Hiring is now underway. City of Flint dispatch operators will be interviewed first. If all positions are not filled, the county will turn to its waiting list of applicants.

The 15 by 60-foot building addition is being constructed in a space previously used for parking.

Currently, the county central dispatch has about 43 employees incuding 32 telecommunicators, five supervisors, two computer technicians, one office administrator, the Director and the Deputy Director, according to information provided on its web site.

The concept of a centralized dispatch was born in 1972, spearheaded by then Mt. Morris Township Police Chief Charles Dunlay and the Michigan State Police, according to a provided history.

Operations began with one state police sergeant (Fayling) and 13 state police dispatchers, servicing six police agencies and 7 fire departments. It was housed in an addition to the former state police post at I-75 and Corunna Road. Operations expanded and were relocated as more agencies joined.

The Genesee Count 911 Consortium was created in 1992 to take over operations from the state police.