Explore the best of the best carnival foods 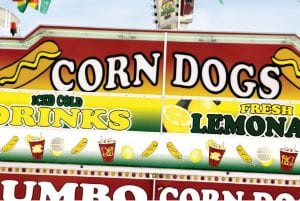 Certain foods are indulgent staples of fair and carnival season.

Summer is a time of year when empty parking lots or fields get transformed into magical places of wonder. When the carnival comes to town, once barren spaces are filled with blinking lights and the hum of mechanical rides that treat thrill seekers to a whirling dervish of excitement. Cheers, jeers and game attendants can be heard, and the savory aroma of fried delights wafts in the breeze.

Traveling fairs and carnivals are hallmarks of late spring and summer. Comprised of vendors, games of chance, amusement rides, and more, these events attract scores of spectators. Historians believe the 1893 Chicago World’s Fair served as a catalyst for the creation of traveling carnivals. After the World’s Fair closed, traveling carnival companies began to tour the United States and abroad. The idea of mobile carnivals may have also been made trendy by the popularity of amusement areas like Coney Island and Atlantic City.

Although the rides and attractions certainly entice their share of carnival visitors, for many the unique culinary offerings available at fairs and carnivals are a big attraction as well. At carnivals, many people indulge in foods that are best enjoyed sparingly, such as fried foods, sticky sweets and meats on a stick. The following are some of the more popular fair foods.

Cotton candy is a treat many people only eat at carnivals or fairs. A form of spun sugar mixed with air to produce a large volume of sticky sweet cotton, cotton candy was invented by dentist William Morrison and confectioner John C. Wharton in 1897.

It was subsequently introduced to the public at the 1904 World’s Fair as “Fairy Floss.”

Foods served on sticks, including corn dogs, are a staple of carnivals because of their portability. Corn dogs are formed by dipping a hot dog into a cornmeal batter and frying it. Many credit Carl and Neil Fletcher with the first “corny dog,” served at the State Fair of Texas in 1942. Those who enjoy hot dogs and the crunch of an outer coating flock to concession stands for these salty delights.

What would a carnival be without some variation of fried dough? From Spanish churros to Italian zeppoles to regular doughnuts, there is something to be said about sweetened, chewy dough fried to form a crunchy outer shell. When dusted with powdered sugar, the confection is complete. Funnel cakes are a type of fried dough regularly sold at fairs across North America. Although the history of funnel cakes is debatable, popular opinion states they were made popular by German immigrants in Pennsylvania. Funnel cakes were once formed by pouring batter through a funnel into a hot pan of oil. Now it is usually done by pouring batter from a pitcher or through an automatic machine.

Although popcorn is a popular fair food, so is its sweetened cousin, kettle corn. Kettle corn was first introduced in the early 1700s by European immigrant farmers. Corn was popped in large castiron pots filled with lard rendered from farm hogs. The corn popped quite quickly in the kettles and sweeteners like sugar or honey were added to the popped corn. Modern kettle corn is made in much the same way, using corn, oil, sugar, and salt. Use of sugar produces a sweet crust on the popping corn. Constant stirring is required, or the sugar will burn in the kettle.

Carnivals, street fairs and feasts are popular attractions when the weather warms up. They’re heralded not only for their rides and games of chance but also for their indulgent foods.