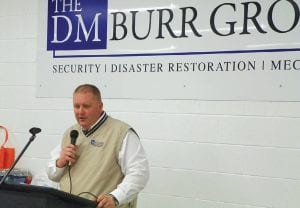 David Burr of The DM Burr Group, spoke to the Genesee Regional Chamber of Commerce about diversifying your business during a lunch networking event his company hosted recently.

FLINT TOWNSHIP — David Burr, owner of The DM Burr Group, recalled the day the bottom dropped out of his business.

Built from scratch, his company had landed a systemwide industrial account with a Tier One automotive supplier based in Livonia that brought Burr about $3.5 million worth of business annually.

Speaking last week as host of a Genesee Regional Chamber of Commerce “Lunch Is On Us” networking event, Burr gave a riveting account of the day the Livonia company’s management called him down to make a sales pitch about his services. He arrived to find that he had competition from a South Carolina company offering a do-it-all smorgasbord of services.

“I literally sat there and watched my business go away,” Burr said. “I knew when I left that there’s no way I’m winning this war.”

In fact, he still was on the highway driving home when he got the phone call that he had 30 days to clear out his equipment because the other company had won his contract. He was devastated.

Burr and his wife Michelle started the company 13 years ago as a mom-and-pop housecleaning shop. Successful but not making a lot of money, they added commercial cleaning. Successful again, they expanded to industrial cleaning.

“We’d work so hard to build this company and overnight it was gone.,” Burr recalled, adding that he had quit a job with benefits and given away his successful commercial accounts after landing the industrial account. He did not have a fallback plan.

Fortunately, a few days later the Livonia company called Burr back because it turned out that the slick do-it-all South Carolina company did not do industrial work.

“I made a decision that day that would never happen to me again,” Burr said.

“My challenge to you is diversify your company,” he said to about 140 people attending the GRCC luncheon. “It does not have to be a major thing. (Ask yourself) is this one thing I can do that will change my revenue stream?”

Burr cautioned that diversifying can be good or bad depending on the chosen enterprise. He shared some of his failures in trucking, lawn maintenance and snowplowing.

“When you try something that doesn’t’ work, get out of it,” he advised. “If you keep kicking a dead horse (when you’re done), it’s still going to be dead.”

Practicing what he preaches, Burr moved into disaster restoration work which he said is one of the most profitable aspects of his business. He started a security arm which is also thriving. His mechanical division has become a national leader in the sales of York heating and cooling equipment, he said. Janitorial services and supplies is another facet of his business.

Michelle Burr, chief financial officer, said the company has about 550 employees but expects to rise to about 700 by the end of summer after hiring for new contracts with schools that are outsourcing their janitorial work. Job applications can be found on the company’s website at dmburr.com, she said.

Their corporate headquarters is a 13,000 square-foot facility at 4252 Holiday Drive purchased in January 2010 and occupied in December after extensive renovations. DM Burr also has branch offices in Indiana, Ohio and Georgia.

The company motto is “taking care of your buildings while you take care of business.”