Fairy garden is labor of love for local girls 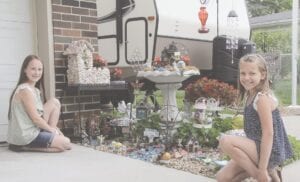 Cousins Leah Hensley, left, and Emma Unger with the fairy garden they’ve been working on for more than five years. Photos by Gary Gould

DAVISON — Since they were 4 years old, cousins Emma Unger and Leah Hensley have been creating a fairy garden with their grandmother, Theresa Unger.

It started as what Theresa calls “girl time” with her granddaughters but has evolved into an annual event which allows the girls, now 9, to get creative while having fun with their grandmother.

Emma explained that each year she, Leah and her grandmother, also known as Mimi to the girls, unpack the houses, glitter-covered mushrooms and colorful gardens of the fairy garden and make plans for what they want to add to the collection that year.

It also depends on how much spare change Theresa has saved throughout the year.

After checking their spending money, the girls and their grandma usually go to Hobby Lobby or Jo-An’s to get what they want to add to the garden that year. This spring, however, they weren’t able to go to the store as spring fell during the COVID-19 pandemic. 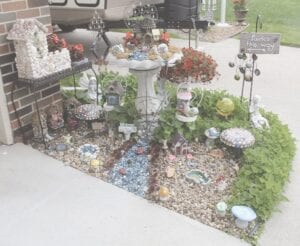 “Since we couldn’t go anywhere this year, we couldn’t buy anything in the stores,” said Leah. “So, we ordered what we wanted on Amazon and built it ourselves.”

Sometimes the girls have to get creative, like when they made their glittery mushrooms, they constructed the mushrooms out of a bowl turned upside-down with a vase as the stem, before they painted it and Bedazzled the top of it.

Dwellings for the fairies to live in were made from birdhouses with stones glued to the exterior, turning it into a Fairy House. Another birdhouse was covered with seashells, cemented there to add decoration.

“They picked out everything themselves,” said Theresa Unger, the former owner of the Hallmark store located next to Rite-Aid in the Davison Village Shopping Center. “When they were 4, I did most of the work for them. Now that they’re 9, they do most of the work.” 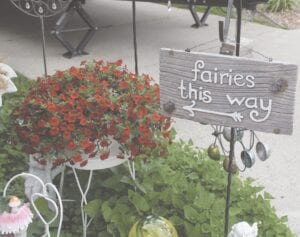 Theresa said she enjoys spending quality time with all of her grandchildren but said ‘girl time’ was necessary because she has three grandsons who also come to visit often.

The girls and Mimi haven’t started planning what they’ll do next year with the Fairy Garden, but they’ll be ready to get down to business once this year’s garden is packed away in the fall.

“They have a lot of fun in Mimi’s yard,” said Theresa.