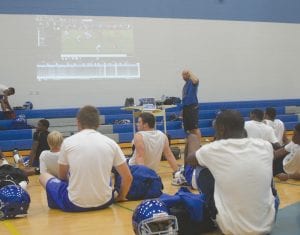 A thunderstorm Monday forced the Cavs inside the gym, but coach Nate Williams used the time for film study.

FLINT TWP. — Long before they play in front of huge crowds under Friday night lights in autumn, high school football players prepare for the season under the hot sun of summer.

Carman-Ainsworth is no exception, and the Cavaliers are hard at work building their team for the 2011 campaign. Most of their friends and fans never see the pain and sweat that make the great plays possible in game situations.

But, building a strong team is just one benefit of the summer workouts, according to Cavs coach Nate Williams.

“It’s important because you’re playing against other teams that are doing the same things,” he said. “If we’re going to be competitive, we have to put in the work.

“But I look at it a little differently,” Williams continued. “With all the other things going on in Flint, it’s a way to keep our kids busy. We keep them up at school and get them in condition, get them bigger, stronger, faster. And for those 2-3 hours, parents know where they’re at and that they’re safe.”

From Monday through Thursday, the Cavs take part in workouts, team camps or 7-on-7 passing leagues. Williams has about 35 varsity players, 20 junior varsity kids and 20-25 freshmen participating. Another 20-30 middle schoolers come out and work two days a week.

Weightlifting is a regular part of the schedule, but not all of it is done in the weight room. The Cavs take part in “caveman” activities, which include flipping tires, pounding them with sledgehammers and handling heavy ropes to build arm strength.

“We call it ‘caveman’ because there are no weights,” Williams said. “It’s all natural, using whatever we’ve got. They like it because it’s creative.”

Some days, the Cavs join other teams in camps and 7-on-7 games. A big one is coming up next Tuesday at Bentley, where Goodrich and Croswell-Lexington also will be on hand.

Other days include film study, but it isn’t all football all the time at Carman- Ainsworth. Williams mixes in a youth ministry and ACT tutors to prepare athletes for their college entrance exams. Those tutorials have drawn athletes from other teams and other schools, he said.