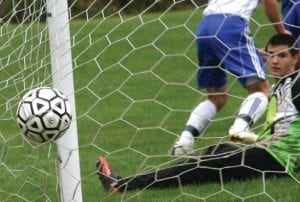 Practice sessions began on Monday, August 6, in football, followed by all other sports on Wednesday, August 8. Practice in football must begin on August 6 for all schools wishing to begin regular season games the weekend of August 23-26. Schools must have 12 days of preseason practice at all levels before their first game, which may not occur before 16 calendar days. All football schools must also conduct at least three days of practice before beginning contact, and those sessions may not include any pads.

There are several significant rules changes on football for 2012:

• On passing plays, a receiver must first contact and establish control of the ball while inbounds – regardless of the opponent’s action. In other words, a catch cannot be ruled on plays where the receiver may have come down in bounds if not for the action of the defender.

• If a player’s helmet comes off during a play, and did not occur as a result of a foul by the opponent, that player must leave the game for one play, unless it happens on the final play of a half or an overtime.

• Jerseys of the visiting team must be white in color, and home jerseys are restricted in the use of white for varsity competition. This was a rule change made in 2007 for implementation this season.

In soccer, Michigan will not participate in a National Federation rules change this year involving the disqualification from a game when a player receives a second yellow card and the subsequent red card. In Michigan, the player will still be ejected from the contest, but that team will not continue the game a player down. The penalty for a hand ball by a player other than the goalkeeper to prevent a score has been changed. If the goal is prevented, the penalty remains a disqualification of the player; however, if the goal is scored, the penalty will now be a caution to the player who deliberately handled the ball. There are no substantial rules change in other fall sports.

The 2012 Fall campaign culminates with post-season tournaments beginning with the Upper Peninsula girls’ tennis finals the week of Oct. 1, and wraps up with the football playoff finals on November 23-24. — Courtesy MHSAA