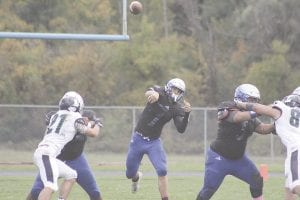 Dustin Fletcher, shown here airing it out against Lapeer last season, is considered one of the best quarterbacks in the Saginaw Valley League. Photo by Joe Oster

Attempts to contact for season preview information were not returned prior to press deadlines. — B.P.

Despite its roster overflowing with collegiate talent, Carman-Ainsworth had a year from hell in 2018, losing three games that came down to the final possession. The Cavaliers finished the season with a 4-5 overall record and outside of the playoff picture.

“Our biggest thing is that we just need to learn to finish,” said Jerry Parker, who is entering his 19th season with the Cavs. “We were in three football games last year that we lost in the fourth quarter with under two minutes in games that we were up. We lost against Davison, Lapeer and Traverse City West all in the last moments of the game. So that’s been our emphasis this offseason, learning how to finish, whether it’s a practice or a lift. Whatever we do, we’re trying to finish. If we win those three football games, we’re 7-2 and in the playoffs. The one team that we played a complete game against was Midland, and they ended up in the [state] semifinals. We beat them 21-6, and they were the best team on our schedule.”

The 2019 Cavaliers only bring back six starters from a year ago. The biggest hole left from graduation was that of Mike Fletcher, the defensive end who will be playing at Michigan State this fall.

“We’re going to be a relatively young football team,” added Parker. “We only have three returners on offense and three on defense. We have six sophomores and one freshman on varsity, so we’re going to be young and inexperienced. The three that we have coming back on both sides are really good players.”

However, Carman-Ainsworth does have consistency under center with Mike’s brother Dustin Fletcher returning at quarterback for the fourth consecutive season.

“He [Dustin] knows the system as well as anyone and is just a great leader,” said Parker. “I don’t have a kid [returning to the varsity team] that caught a football last year. All of our top five receivers are gone, so having Dustin out there is almost like having a coach. That’s very important [to have], being a young and inexperienced team. We’re going to rely on him in a lot of ways, running, throwing, leadership, all-around.”

Fletcher’s biggest strength is his versality. He possesses a gifted throwing arm, which keeps the opponent honest when he scrambles out of the pocket. Unlike most running quarterbacks, Fletcher has the body of a tight end, standing at 6-foot-4 and 210 lbs. His size allows him to withstand more hits than your average QB with a scrambling tendency. Parker plans to fully utilize this in Fletcher’s final season as a Cavalier.

“We are going to run a lot more RPO’s (run-pass option) with Dustin to take advantage of his ability,” said Parker. “We’re going to use him a little bit more as a runner this year than we have in the past.”

The entire offense won’t be on Fletcher’s shoulders, though, as the Cavs return some veteran talent. Keisean Brown is a talented offensive lineman and the key in protecting Fletcher in the pocket. Carman- Ainsworth’s primary offensive weapon will be Chris Coleman, a junior wideout with an ability to run the ball out of the backfield as well.

The Cavaliers might be even more talented the other side of the ball with All-Saginaw Valley League defensive end Teshan Compaore leading the unit. The other two returning starters are nose tackle Aaviyon Leverette and defensive end Josh Jackson, both of whom can be nightmares for opposing offenses. Graduation also has some upside, as the thinned-out roster has allowed Ronnie Pompey to emerge as a breakout candidate this season. Pompey saw some playing time at outside and inside linebacker last season, but he has made a leap in the offseason and was even named team captain.

“He’s one of our captains and our leader of the defense this year,” said Parker of Pompey. “He played quite a bit at a couple different positions. I really expect him to have a great season this year as a senior, even though he didn’t play a lot last year.”

Just like last season, Carman- Ainsworth has a brutal schedule that flows through the always-tough SVLRed division. Parker noted the challenges that await with Davison and Lapeer, but emphasized the Cavs’ matchup against Grand Blanc on Sept. 20.

“Coach-talk is that you always want to get that first game under your belt, but you know we have a tough schedule,” said Parker. “Grand Blanc beat us pretty badly last year, and that’s probably our biggest rivalry as far as they go. We’re always looking forward to Grand Blanc.”

Still, revenge on the Bobcats isn’t near the top of Carman-Ainsworth’s to-do list. Parker and the rest of the Cavs are headed into the season with one sole purpose: a playoff berth.

“Every year we want to make the playoffs; that’s one of our goals,” said Parker. “We want to win the league. If we win the Saginaw Valley Championship, then we know we’re going to be in the playoffs and that would be a great season for our football team.” — J.O.

The Lady Cavaliers will have a new look in coach Misty Hubbard’s first season at the helm. The first-year high school coach and former Div. 2 college volleyball player takes over a Carman- Ainsworth team that went 16-24-5 and 2-4 in league play last season. With the graduation of seven seniors and only four varsity returnees, Hubbard is preparing for a rebuild in 2019.

“We have been focusing on the fundamentals of volleyball and are hoping to elevate our level of play as the season continues,” said Hubbard of the inexperienced squad. “We know we will be facing tough competition throughout the season and are working hard to prepare.”

The transition will be made easier with the leadership from the senior trio of Emily Carroll, Joselyn McBride and Sydney Johnson. Carroll is an outside hitter and setter, while McBride and Johnson are both defensive specialists. The Lady Cavs also return junior Sarah Roe, who is expected to play a crucial role in Carman-Ainsworth’s defense as a defensive specialist.

The offense will be led by all newcomers with junior Yilanina Richmond at middle hitter, senior Anaiya Johnson at right hitter and sophomore Kendall Brown at outside hitter. Junior Sydnee Cooley is another first-year varsity player that Hubbard expects to play a vital role on the team.

“A successful season at C-A this year will be creating a team that works hard and continually pushes each other to be our very best,” added Hubbard. “Each player has a goal to continually improve over time, and we are focused on achieving our goals.” — J.O.