The Carman-Ainsworth girls’ golf team had to absorb the loss of two players who graduated, but added two newcomers to keep its four-player roster intact.

Returning to the team this season are Michaela Hitchcock and Serenity Cooper, while new to the team are Brooklyn Daly and Abbi Pelky. This season’s team is young and inexperienced, according to head coach Matt Young, but Young pointed out the team is also full of potential.

“We will have struggles, but I have high expectations that they will grow as players throughout the season,” said Young. “I’m excited that this team is eager to learn and improve. We will have a fun season and the girls will learn a sport that they can play the rest of their lives.” – A.V.

The Cavaliers soccer team’s biggest challenge this season will be the depth of its roster, according to 12-year head coach Jay Witham, after having lost seven key players to graduation following last year’s 12-5-3 season. 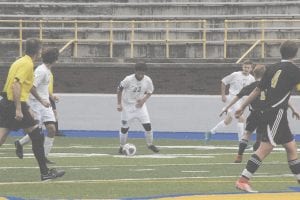 Carman-Ainsworth’s Omar Abdalla, shown here last season, will be a key component of the Cavaliers’ defense and midfield this year. Photo by Brandon Pope

Witham noted that the team is “selfless, scrappy and high-character” this year as well. Carman-Ainsworth’s biggest challenge in the Saginaw Valley League-South will be facing powerhouse Grand Blanc. The Cavaliers will also see tough league competition from Flint Powers and Davison. – K.R.

Carman-Ainsworth will not field a boys’ tennis team for the second year. – B.P. 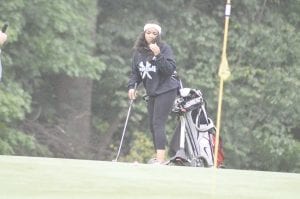 Carman-Ainsworth’s Serenity Cooper is one of two former players returning to the Cavaliers in a reloading phase this season. Photo by Austin VanDaele