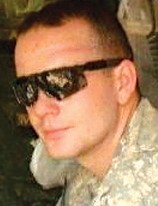 Lilly died June 14 from injuries caused by an improvised explosive device while on active duty in Operation Enduring Freedom in Panjway, Afghanistan. He was a 2005 graduate of Carman- Ainsworth High School.

Funeral services also were held Tuesday at the Swartz Funeral Home in Grand Blanc with burial following at Great Lakes National Cemetery in Holly with full Military Honors. In lieu of flowers, the family asked that contributions be made to Old News Boys.

Lilly was born on September 22, 1986 in Flint the son of Michael J. Lilly and the late Lilla F. Lilly. On September 7, 2007 he married Katrina J. Frailey in Waynesville, Missouri. They have a son Alexander, age 3.

Surviving include his wife and son; his father, Michael and step-mother, Carol; a brother, Thomas; a stepbrother, Robert Mann and step-sister, Rachel Mann; step-grandparents, Don and Carolyn Sullenberger; aunt, Martha (Steve) Alexander; and many other aunts, uncles, cousins and nieces and nephews. He was preceded in death by his mother, Lilla in 1999.

“For the third time since the beginning of the wars in the Middle East, a Carman-Ainsworth graduate has made the ultimate sacrifice on behalf of his country,” said C-A Superintendent Bill Haley, in a statement last week, after hearing of Lilly’s death.

One of Lilly’s high school teachers, DeLynne Miller, remembered him for his enthusiastic participation in many Carman-Ainsworth theater productions and for his excellent sense of humor.

“May his loss remind us all to respect and appreciate the gift of life, and to re-double our personal efforts to make peace; within our own hearts and within our own homes and communities,” Haley said. — R.S.