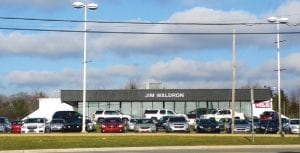 Hundreds of used vehicles are already on site awaiting the opening of Jim Waldron dealership on MIller Road next year.

FLINT TWP. — The name is up on the building and the lot is full of cars but the new Jim Waldron dealership on Miller Road is not quite ready to open yet.

It will be some time after the first of the year, said Jim Waldron Jr., co-owner of the recently purchased facilities at 4140 Miller Road, formerly occupied by Genesee Valley Chrysler- Dodge-Jeep-Ram and prior to that Chinonis Chrysler Plymouth Dodge. Genesee Valley closed in January after being purchased by the Al Serra Auto Group and moved to Grand Blanc.

It will sell all makes and models of used vehicles with expectations of having 300-400 in stock.

“It is going to be a nontraditional used car lot,” Waldron said. Vehicles will be priced aggressively at a rock-bottom price that will leave no room for haggling, he said.

“We think it will be good for the community. People will be able to get a nice vehicle for an affordable price.”

For now, the lot is being used for storage and Waldron is working on sprucing up the building, getting it staffed properly and other pre-opening details.

About 20 people will work for the dealership including six sales and support staff people yet to be hired.

Waldron said they chose the Miller Road location because of its high visibility and that it is already set up as a car dealership.

“It will suit our needs to grow into something bigger,” he said.

“We are really excited about it.”