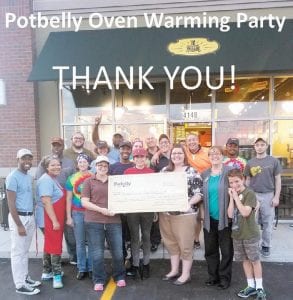 Priority Children received a big check as a result of a pre-opening fundraising event at the new Potbelly Sandwich Shop on Miller Road.

Potbelly’s “Oven Warming Party,” is its traditional pre-opening event to introduce itself to a community and part of its ongoing commitment to support local charities. Details are provided on its web site at www.potbelly.com/Company/ FundraisingAndDonations.aspx

Baby Court is one of several programs sponsored by Priority Children, whose mission is to make Genesee County a better place to raise children by improving the quality of life for families.

Priority Children also accepts ongoing support for its work via a donation form on its website at www.prioritychildren.org

Online shoppers also can support the organization via AmazonSmile, a fundraising venue through which Priority Children will receive 0.5 percent of the purchase price of all items bought at amazon.com.

Shoppers must designate Priority Children as the charitable recipient of their donation, prior to making the purchase. For more information, visit smile.amazon.com/

Priority Children also has announced that it is seeking sponsors and accepting nominations for its annual Children’s Champion Awards, to be held Friday, February 5, 2016 at the Riverfront Banquet Center in downtown Flint.

Nominations are accepted in nine categories recognizing individuals, businesses and organizations that work to improve the lives of children.

A Carman-Ainsworth high school student was the 2015 winner of the Robert E. Weiss Outstanding Youth Award that recognizes an outstanding student effort such as mentoring, tutoring, organizing or other volunteer work.

A list of all Children’s Champion nomination categories is posted online at http:// www.prioritychildren.org/ccabnominationcategories2016. pdf

Nomination forms also are available online. Youth nominations are due by Friday, November 20, 2015 and all other nominations must be received by Friday, Dec. 4, 2015.