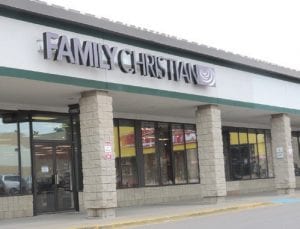 Family Christian stores including this one on Miller Road are fighting for survival.

FLINT TWP. — The Family Christian Store (FCS) in Genesee Crossing Shopping Center, 3577 Miller Road, is in financial trouble and could be facing closure.

Its parent company, Grand Rapidsbased FCS, filed for bankruptcy protection on Feb. 11, in U.S. Bankruptcy Court for the Western District of Michigan.

At that time, company officials said in a press release that it did not anticipate closing any of its 266 stores or laying off any of an estimated 3,100 employees.

But the company’s restructuring plan hit a snag last week when a bankruptcy judge rejected a motion for FCS to sell all assets to the highest bidder from a sales auction conducted in May.

Amidst allegations of insider trading and unfair conduct during the auction, Judge John T. Gregg ruled that FCS’ auction proceedings were out of order.

The sale process has been prolonged, controversial and contested, Judge Gregg said in a 48-page memorandum decision.

FCS’ proposed to sell its assets to “an indisputable insider,” the Judge said, referring to

FCS Acquisition, LLC, a company created by Richard Jackson, an Atlanta businessman, for the purpose of buying FCS’ assets.

Jackson and an investment group are alleged to have paid $7 million dollars last year to help the struggling FCS keep a line of credit in danger of being terminated by JP Morgan Chase, according to court documents.

Questions were raised about a latenight consultation phone call during auction proceeding between Jackson and Chuck Bengochea, FCS president and CEO.

The second highest auction bidder, a national liquidator, alleged that the auction process was “rigged” to benefit of the winning bidder and insider, according to court documents.

While rejecting accusations of “fraud”, Judge Gregg said “this type of ex parte contact during an auction is completely inappropriate due to the insider relationship … “

Judge Gregg allowed that FCS can reopen the auction and accepts bids form all qualified bidders.

Or, FCS can choose to file a plan of reorganization that does not raise concerns from the court of failure to comply with the Bankruptcy Code, he said.

“The court strongly encourages (FCS), as well as any potential purchaser, to be cognizant of the court’s comments regarding the structure of any agreement and the constraints imposed by the Bankruptcy Code, from which this court will not deviate,” Judge Gregg concluded.

He acknowledged testimony that FCS’ cash reserves will likely be depleted by mid- to late July and likely will not be able to continue operations if its assets are not sold soon.

FCS sell religious merchandise — books, music, movies and other supplies — at retail stores int 36 states All earnings are donated to Christian ministries serving families, orphans and widows in distress., according to company statements.