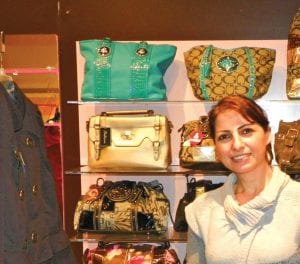 The store got its name from the first initials of her three children, said Misreen Abu Farha, owner, of Flint.

She first opened the family-owned and operated store in downtown Clio but after about six months of operating there decided to move to a higher traffic venue.

The new store opened about 12 days ago and is located in the newer Outdoor Village wing of the mall close to two national women’s clothing chains — Chico’s and Coldwater Creek.

The 2,100 square-foot space was previously occupied by a bridal salon which moved out in June.

Abu Farha said she’s always loved fashion and that operating her own store is a longtime dream come true. But as a busy mom of three she does not have as much time to devote to herself as she’d like, she said.

The store is a one-stop shopping source for a woman’s fashionable needs including shoes, handbags, perfume, nail polish, jeans, evening wear and more. Abu Farha said her target customer is ages 15 to 45.

The store also offers a small section of products carved from Olive wood from the Holy Land. It will be a permanent selection not just seasonal, she said.

Abu Farha said she’ll kick off Black Friday sales with half-off of everything in the store.