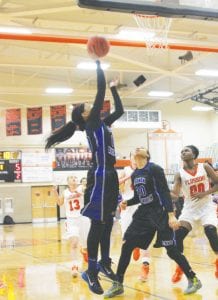 FLINT TWP. – Carman-Ainsworth charged out to a 17-point first-quarter lead and coasted to a 53-31 win over Owosso in a non-league girls’ basketball game Tuesday night at home.

Carman-Ainsworth led 26-9 after the first eight minutes and 33-17 at halftime. It was 42-23 going into the fourth quarter.

Last Friday, the Lady Cavs crushed Flint Southwestern Academy 66-38 in a Saginaw Valley League-South game at home. Carman-Ainsworth jumped ahead 16-5 in the first quarter, 40-16 by halftime and 61-24 going into the fourth quarter. McDonald had 18 points, Natalia Kincaid scored 11 and Harmany Williams added 10 to lead the Lady Cavs. Carpenter scored eight and Eriona Chambers and Shakara Johnson had seven each as eight players scored.

Carman-Ainsworth will visit Lapeer in another SVL-South game Friday.