Tis the season for BCS decisions and debate. I know many people look at the BCS as a failure year in and year out. Unfortunately, until a playoff system gets implemented (if it ever does) the top two teams will always entail a debate. I feel as though the BCS, during most college football seasons, get it right. Once again, here in 2011, the BCS got it right! The two best college football teams are Alabama and LSU. I don’t give a rats tail if they met earlier in the season in a game that was billed as the “Game of the Century”! It was hard to be totally honest. LSU prevailed with a 9-6 victory and no touchdowns scored. I personally don’t need to see 30 points a game to be entertaining. Do you? I appreciate great defense, mostly because the majority of teams can’t play it. The next meathead that makes the argument to me that Alabama didn’t win their conference or even play in the SEC Championship game, so how can they play for a National Title? I say, so what? Is it Bama’s fault they were in the same division as LSU? Answer is, NO! How about the PAC 12 and UCLA’s 6- 6 record playing Oregon for the PAC 12 title game? I would call that a travesty. The other argument is, fans don’t want to see a rematch. Big deal, it’s a rematch on a neutral field for the white crystal football. LSU and Alabama deserve these number-one and two rankings. I say the BCS got it right! I have spoken; case closed. 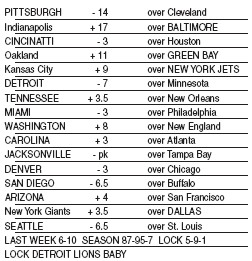 The inaugural Big Ten Championship game was an absolute dandy. MSU and Wisconsin put on quite the show on the football field. A re-match game by the way! I thought I would stress my point a little more. The outcome, this time, went the way of the Badgers, as I predicted. However, the Spartans, I felt, let this game slip right by the punter’s leg! What? Yes, MSU had this game won, if not for a typical MSU boneheaded play at the end of the football game. The Spartys, trailing by three points, were getting the ball back until they ran into the kicker giving Wisky an automatic first down. Game over, Wisconsin wins.

A dirty shame, as MSU played an absolutely fabulous game, until that debacle. Why, why, why would you even be close to the punter?! Man, MSU always seems to make that critical mistake at critical times, don’t they? I believe so. A fourth and six Hail Mary pass completed by Wisconsin made the season series between the Badgers and Spartans a battle of Mary’s with Wisconsin winning the big prize, a trip to the Rose Bowl. The Spartans will meet the Georgia Bulldogs in the Outback Bowl. I see a great game here between these two schools.

Michigan receives a BCS bid to the Sugar Bowl. The Wolverines will take on the

Virginia Tech Hokies. This is a match up of even teams and should be a good game to watch. The issue is, did these two teams deserve a BCS bid? The answer is, heck no. Virginia Tech’s schedule was cream puffy, hold the cream please. Michigan also played a soft cream cheese schedule. There is no way Michigan deserved the BCS bid over Michigan State, which defeated the

Michigan State has every reason to be screaming over this bowl snubbing. The BCS failed in this bowl match up. The bottom line is Michigan and Virginia Tech had nice seasons, but don’t deserve to be playing in a BCS bowl game. Michigan is definitely being rewarded for its miraculous turnaround in its football program. What this comes down to, is money, tickets and travel. These two schools travel well, they will buy tickets, and the BCS has a full stadium and lots of cash from ticket sales. It’s sad, but that’s the system, college football fans.

The NHL has finally approved realignment. Gone are the six divisions and in are four seperate conferences. It’s about time. Hockey fans have wanted this a long time, with some NHL teams wanting it, too! NHL teams will play every team in a home and home series. The Red Wings’ conference has these teams: St. Louis, Dallas, Winnipeg, Dallas, Nashville, Columbus and Chicago.

I cannot wait for the NFL season of picking games to end!! I stink, it’s been a long year, and just want to get to .500 to keep my streak alive! Roll’em Scrammy… thefatguy@mihomepaper.com