It’s just not my thing 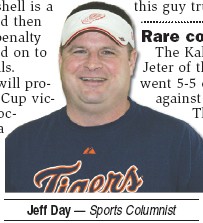 Yao Ming, the seven-foot six-inch center from the Houston Rockets, has called it a career in the NBA. Yao, the top pick in the 2002 draft, has suffered through numerous foot injuries over the last six seasons. Yao has missed a total of 259 games to these foot problems. Over the past nine seasons when healthy, Yao was a force in the paint to deal with. I know there is a ton of sadness in China regarding Yao’s retirement. He was the man in China and I would have loved to see Yao play the game injury free during his nine-year career. I feel he would have been so dominant. I can personally tell you, I went to a game at the Palace of Auburn Hills and stood right next to him on the floor. It was an eye-opening experience, too! Yao’s calf and leg muscles were absolutely huge! I thought to myself, watching him on television is one thing, but up close and in person, wow, what a big man! The Houston Rockets were the only team Yao ever played for and his career is now over! All talk, no action

The NFL football talks are still taking place and I believe progress is moving and an agreement is closer to being done. My personal guess is, it will be done around July 20 or so. That will be just in time for the training camps to get started and no games will be missed. Unwanted spotlight

A couple of players hit the police blotter over the weekend. Hines Ward danced his way through his sobriety test and a failing grade he received. The Pacman (not the video game) was arrested for his sixth time, or in other words, a quick six for a touchdown. He claims to be innocent as always. The Pacman needs to be called “Game Over”! What an idiot this guy truly is. Good Grief!

Jeter of the New York Yankees, went 5-5 on Saturday afternoon against the Tampa Bay Rays.

Columnist has never reached the

3,000-hit plateau. Jeter is a class act and I am glad he got the job done before the All-Star break and the fact he did it at home in Yankee Stadium. The home fans deserved to witness it at home. It’s a bummer for the Yankees though, as A-Rod will be on the disabled list for a month due to a knee injury. That will hurt the Yanks’ chances of catching the Red Sox for the division title.

The Tigers’ Justin Verlander pitched the Detroiters into first place on the last day before the All-Star break. I just can’t believe how Verlander is dealing right now on the hill. He is virtually unhittable! It’s a shame he had to pitch on Sunday, as that made him unavailable to throw in Tuesday’s game. The nod went to Jered Weaver of the Los Angeles Angels. Roy Halladay of the Philadelphia Phillies started for the National League. Remember, baseball fans, the winner of the All-Star game gets home field in the World Series. What a ridiculous rule! Come on Bud, it’s an exhibition game for Cripes sake! Across the pond

Golf fans, the British Open takes place this weekend. The golf field will not have Tiger Woods in it due to his injury. Tiger, who once looked like a cinch to pass The Golden Bear in majors, might not. Wow, how things have changed for Tiger Woods over the last year and a half. I am curious to see how Rory plays this weekend. Can he win back to back majors? thefatguy@mihomepaper.com