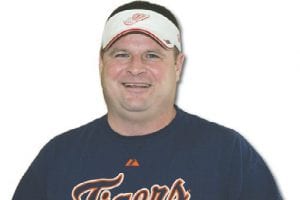 Baseball season has less than 20 games left in the 2012 season. The Tigers currently sit two games behind the Pale Sox of Chicago. The rain-out game is on television right now as I write this. In the bottom of the sixth inning, Tigs losing, 5-4. The bottom line is Detroit will be three games out of first, or one.

Papa “Sir Drink A Bottle of Water” before blowing a huge game did in the Tigers against Cleveland Sunday afternoon. He gave up two runs in the bottom of the ninth and Cleveland salvaged a game of a series it should have swept. Should Detroit fall a game short of making the playoffs, remember that one on your Tiger bad defeats list. I think Detroit will be watching the playoffs in October from their houses on the big screen television.

I have said all summer long they have two major league hitters in Miggy and Prince. Austin Jackson has been rock solid all season long, too! The rest are way too inconsistent at the plate day in and day out. The Tigers miss Big Victor Martinez’ bat in the line up so bad. Max Scherzer, what a season you have had. I think you have been the “ACE” for the last two months on the bump for the Tigers. It’s a down-right shame all the fans who packed Comerica Park this season and the Tigers will not even play October playoff baseball.

Are the “Fighting Irish” of Notre Dame back as a college power? They looked like it Saturday night in East Lansing. The Irish smothered the Spartys’ offense like a blanket on a new born baby. MSU could only muster up a lousy field goal in this contest. Andrew Maxwell struggled under center going 23-45 for 187 yards. Le’Veon Bell had 19 carries for 77 yards?

Ouchhhieee, I say! The loss snapped MSU’s 15-game home winning streak. Notre Dame is off to its best start since 2002 and the Tyrone Willingham team. Everett Golson looked good at quarterback for ND. The staggering and stunning number for me is Notre Dame was 1-14 on third down efficiency, yet still won by 17 points. MSU will get back on track this weekend with cream puff Eastern Michigan.

The Irish will get Michigan at home under the lights. I know Michigan fans have not forgotten last year’s miracle come back under the lights in the Big House against the Irish. Can Michigan pull off the upset Saturday night in South Bend? Probably not. Denard Robinson will have to play better than he has so far in 2012 for U of M to win. The Michigan defense is not very good at the moment, especially against the run. Fat Guy prediction: Irish Sweep of the

The NFL shocker and survivor pool killer is Arizona over Tom

Brady’s Patriots. The Saints are stumbling out of the gate at 0-2.

The Lions lose to the Forty-

Sunday night football. I am just glad they did not embarrass themselves, and they did not. The Niners are the best complete team, offensively and defensively, in the NFL that I have seen so far. Detroit will take its 1-1 record on the road to Tennessee next Sunday. This Titans team is awful and Detroit should pick up the “W”. Beware, though, Detroit “Cryons”, the Titans will play desperate trying to get that first victory of the season. Cheeseball prediction: Motown Boys 34 and Nashville Crashville 23.

I cannot suffer through another NHL lockout. What will I do on cold winter nights in the Great State of Michigan with no NHL hockey to watch? Cry, that is what I will do! The Fat Guy needs his Red Wing hockey.

The other deal that needs to get done is bring back the real NFL officials! Last weekend was awful officiating! It made me puke watching those buffoons in zebra uniforms blowing calls all game long.

I had a great week in the NFL picking games. Let’s stay hot!