Rematch in the works? 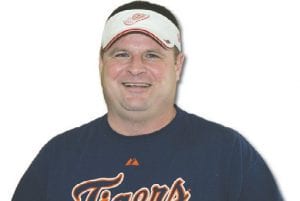 The Detroit Tigers are two wins away from heading back to the World Series. The last apperance came in 2006 with a World Series loss to the St. Louis Cardinals. A possible rematch could be in the mix, as St. Louis is in the NLCS against the San Francisco Giants.

Hold on, Fat Guy, you are getting way ahead of yourself. Let’s focus on the Tigers- Yankees series for a minute. I have to address the most talked about Tigers’ topic: Jose “No Clossee” Valverde! I have stated all summer long that this clown would cost us in crucial ball games when they counted the most! Once again, I was right on the money. This guy is the worst closer; period. All of his side antics make him a total joke of a ball player. The number one reason it bothers me so much is he wants attention on himself, not the team. It is a team game, not a me game.

I question whether “No Way Jose” even cares if he loses a ball game or not. He left the game the other night and didn’t even stay on the bench to watch the final outcome of a playoff game! This is not June playing the Seattle Mariners! The Tigers are trying to win a World Series, for cripe’s sake! The heck with Jose’s fragile mental midget state of mind. The Tigers don’t need him the rest of the way! Trust me on that one. Sorry, man, I had to get that off my chest. I know most of you fans totally agree with me, and some will not.

It’s Tuesday and Justin Verlander has a chance to put the Yanks in a 3-0 hole in this ALCS. I love the Tigs’ chances. The New York Yankees are plain and simple just not hitting the baseball at all. A-Rod, Swisher, Martin and Cano are basically automatic outs at the plate. The Captain, Derek Jeter, is out with a fractured ankle. Things are looking bleak for the Pinstrippers. Comerica Park will be rocking these next three nights if they need game five. I say, here we come World Series and witnessing this “Yankee Spankee” is so enjoyable!

Who will be the Tigers’ opponent in the World Series? I hope it’s the San Francisco Giants, personally. The Cardinals won it last season and of course defeated Detroit in 2006. Maybe 2006 revenge should be my wish, but it’s not. The Cardinals are a good-hitting ball club and that scares me.

The Lions temporarily saved their season with a come-from-behind victory against the Philadelphia Eagles. The “Lambs” stunk up the joint for three quarters before coming alive in the fourth quarter. Then Jason

Hanson pushed out his rocking chair and kicked the game winner in overtime.

1-4. A huge game is on tap Monday night in Chicago with the 4-1 Bears. This game is a Monday Night rematch of last year when Detroit defeated the Bears at Ford Field.

Party at the Big House

The Big House on Saturday will be filled with Maize and Blue fans at 3:30 p.m. It will also have some green and white sprinkled into the seats, too. The Spartys have a four-game winning streak against their hated rivals. Will Denard Robinson lose every game he ever plays against the Spartans? He possibly could. The Spartans are not playing very good football here in 2012. MSU was ranked pretty high and yet has underperformed. The offense has been tragic all season long. Andrew Maxwell has been terrible under center for Sparty. The defense has been good, but not as good as it should be. The Wolverines have also been very average. The Fat Guy Prediction: Not Five In a Row 24 and Maxwell Housed 16.