Donna’s Donuts packs them in for paczki day 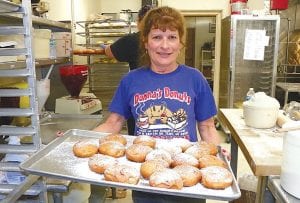 Kathy McElyea, a worker at Donna’s Donuts, delivers the next batch to the counter to keep up with brisk Fat Tuesday sales.

If that wasn’t obvious from the sign outside Donna’s Donuts or the parking lot filled with cars, it became clear from the standing room only inside where many tables were stacked high with boxes of pre-orders. The deep-fried, sweets-filled pastry has transcended its Polish roots to become a Fat Tuesday tradition with broad appeal.

John Gibbons, owner of Donna’s Donuts on Bristol Road, who is not Polish, said he expected to sell about 1,400 dozen paczkis Tuesday, topping his record of 1,200 last year. It’s the busiest day of the year for the shop, Gibbons said, adding that he is thinking about opening up a second shop with a separate staff to help share the load next year.

His daughter, Alicia, said she’d been up 24 hours preparing paczkis to meet demand. Still by 10 a.m, Gibbons said they had already run out three times and had to ask people to come back.

Demand is high because there are few donut shops left in town compared to six when Gibbons bought the donut shop in 2003, he said.

Donna’s is well known for the quality of their pastry products and the Fat Tuesday crowd was no exception. Tradition calls for celebrating by eating the calorie-laden fried paczki on Fat Tuesday as a last hurrah before the time of sacrifice begins on Ash Wednesday with the start of the Lenten season.

Gibbons said custard and raspberry seemed to be the most popular fillings for the paczkis but he was was moving prunes, cherry, apple, strawberry, lemon, blueberry and cream-filled ones.

He said he expected to be sold out by 1 p.m. when his crew would start preparation for the next day’s selection of regular pastries.