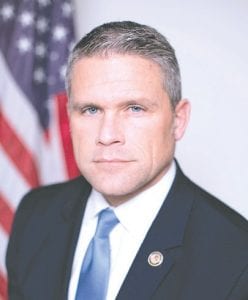 FLINT — In addition to Anthony (Tony) Vance being honored as Grand Marshal of the 2020 St. Patrick’s Day festivities, his father Michael (Mike) Vance has been named this year’s Irish Father of the Year.

They will be honored at the 12:02 p.m. St. Patrick’s Day Mass in St. Michael Catholic Church in downtown Flint on Tuesday, March 17, and at the festivities to follow in the St. Matthew Catholic Church field house. Also to be honored are the Irish Mother of the Year and the Miss Hibernian queen and her court.

The Vance heritage goes back centuries to Ireland. Mike’s ancestors on both sides of his family tree fled Ireland’s sectarianism and the Potato Famine, which began in 1845, in hopes of finding a better life in the new world. Mike’s ancestors landed on Grosse Isle in the St. Lawrence River just outside of Quebec City, which was the Canadian equivalent to America’s Ellis Island.

Legend has it that Mike’s great, great grandfather Patrick Clyne walked from St. Mary’s, Ontario, to Gooderich, Ontario, (a distance of 50 miles) with his deed in his pocket to cast his first vote in the New World.

Mike’s family eventually made it to the United States when Mike’s grandfather, Edward Clyne, came to Flint to work in the Buick factory. Shortly thereafter, Edward began working for the Detroit Urban Railway, an interurban streetcar line in use from the 1890s until the late 1920s between Detroit and Flint.

Mike was born in 1948 in Flint to Jim and Allene Vance (2001 Irish Father of the Year and 1995 Irish Mother of the Year). Mike is the oldest of four siblings, Janet (Tony) Patsy, Mary Jane (John) Ockert, and Katy Vance.

During his senior year at Eastern Michigan, Mike married his high school sweetheart, Nancy Beaubien (1966 St. Matthew High School homecoming queen). After graduating from Eastern Michigan, Mike began working for the Flint Community Schools as a special education teacher at Flint Central High School. He also coached the varsity cross country and track and field teams at Flint Central for 20 years where he coached all three of his sons. He coached a number of championship teams and spent the last five years at Central as athletic director.

Ever thankful to God, Mike and Nancy now have three sons and 10 grandchildren and recently celebrated their 50th wedding anniversary.

Mike is a member of the Ancient Order of Hibernians and St. Matthew Parish in Flint. He serves on the board of Sovita Credit Union, the Greater Flint Hall of Fame, Bishop Trust Advisory Committee and is a founding member of the Gary Haggart Club, a non-profit organization that raises funds to help the less fortunate of Flint and Genesee County.

Their oldest son, Tony (2020 Grand Marshal) is a federal prosecutor with the United States Department of Justice-U.S. Attorney’s Office. He and his wife, Karen, have three daughters.

Tony was born in 1972 and graduated from Flint Central High School in 1991, where he played football and track and field, earning all-city and all-conference honors in football and was a two-time city champion in the pole vault.

Tony graduated with honors from Michigan State University in 1995 with a bachelor’s degree in criminal justice and an additional major in political science. He attended DePaul University College of Law in Chicago.

During law school, Tony clerked for U.S. Representative Dale Kildee in Washington, D.C., and at the Cabini Green Legal Aid Clinic in Chicago.

After graduation from law school, Tony clerked for Genesee County Circuit Judge Robert Ransom. During this time working for Judge Ransom, beautiful young lass caught Tony’s eye as she took the witness stand at a trial. After some shrewd detective work to figure out who this lassie was, the courtship began after the trial. Two years later, Tony and Karen Konesny were married. That was nearly 17 years ago and together they have three daughters, Madison, as recent MSU grad living and working in Nashville, and Caroline and Natalie, students at Powers Catholic High School in Flint.

After joining the U.S. Attorney’s Office in 2010, Tony became chief of the U.S. attorney’s offices in Flint and Bay City in 2017, where he supervises a staff of 18 between the two offices.

Tony is a member of the Ancient Order of Hibernians, St. John Vianney Church in Flint, and Genesee Vehicle City Sports Committee and the Fraternal Order of Police as well as legal groups at the local, state and national levels.

He also enjoys volunteering as a mentor with Big Brothers and Big Sisters of Flint and Genesee County and speaking at various high schools throughout the county about the federal government and federal law.

In his younger years, Tony was an avid rugby player, playing for 17 years with the Flint Rogues Rugby Football Club, where he earned several “Man of the Match” honors. He also played with the Flint Arrows and Flint Sports Soccer Club.