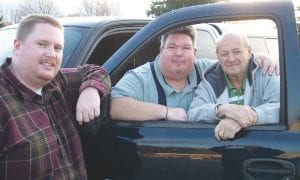 The streets of the subdivision off Beecher and Mill roads were patrolled “Devils Night,” Oct. 30, and “Halloween,” Oct. 31, by crime watch volunteers.

Lt. Tim Jones of the police department welcomed Assistant Fire Chief, Mike Berkley who provided a list of abandoned homes and structures for the crime watch to target during their patrols.

“ There was a lower than normal turnout of trick-or-treaters in the Westwood Hills Neighborhood,” said Alex Clark, who grew up there, has watched a trend toward serious crimes occurring, and fears worse days to come if the Flint Township Police Department does not maintain a high level of road patrol staffing.

Alex recalled when the worst Devil’s Night occurrences involved toilet paper and shaving cream but residents now have to worry about homes being broken into and cars being stolen.

“ We tried to maintain a high level of visibility throughout the township Trick-or- Treating hours as well as intermittent patrols for suspicious situations and property checks over those 2 days,” Alex said, adding it would be great to bring back times when neighbors vigilantly looked out for each other and developed strong partnerships with the township police and fire departments.

Westwood Hills Crime Watch strongly encourages other residents to get involved with community programs such as the Neighborhood Crime Watches.

“ We’re trying to take a more proactive approach,’’ said Al Clark, who retired from the police force in Feb. 2010 after 25 years of service. He started the crime watch circa 1995 as part of the community policing effort. — Rhonda Sanders