“Favorites’’ car judging highlights Back To the Bricks 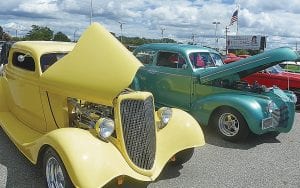 FLINT TWP. — With nearly 300 classic cars to choose from, it was hard to pick one favorite but several township officials got in gear as contest judges at the firstever Back to the Bricks Tune Up Event held in Flint Township last week.

Events including deejay music, food vendors and door prizes began at 2 p.m. at the Patsy Lou Williamson Mega Lot at Linden and Corunna Roads, co-sponsored by HealthPlus of Michigan. Township officials were among nine judges for the Favorite Car contest.

Don Williamson was on hand to hand the Patsy Lou Williamson Choice trophy to the owner of a 1965 Plymouth Belevedere. His own choice trophy went to a 1964 Chevy Corvette. 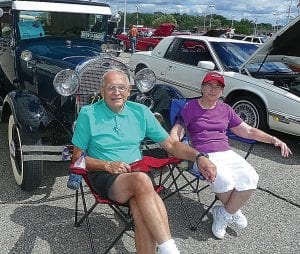 Larry White, executive vice president for the Pasty Lou dealerships, bestowed his trophy on a 1957 Chevy BelAir. The HealthPlus People’s Choice trophy went to a 1953 Oldsmobile 88.

Classic cars of all colors, makes and models began filling in the parking lot at noon and had reached nearly 300 at 4 p.m. when the event venue shifted to Dukes’ Car and Stereo on Miller Road where more prizes, free T-shirts, food, music and fun were on offer.

“ This place was rocking,’’ said Craig Parker, a township resident and classic car owner who organized the event.

For a first-time showing, Parker said he was pleased with the turnout at Patsy Lou and expected even more cars to show up at Duke’s because of the more convenient evening hours.

“If we did a good job, we’ll get another shot at it (next year),” Parker said.

It was Louie Lemieux of Flushing’s first time out as a car exhibitor though he and his wife Sandee have attended several Back to the Bricks events to look at the cars. 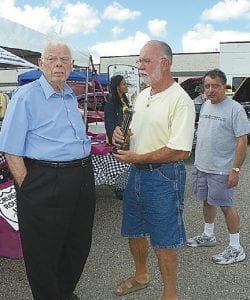 Don Williamson personally presented the Don J. Williamson Choice Award to the owner of his favorite car in the show — a 1964 Chevy Corvette.

Lemieux recently brought his dream car – a 1929 Model A Ford – from the estate of Bud E. Perior Sr. of Genesee, who restored it.

One of the car’s attractions was the exterior rumble seat in the boot which Lemieux said is hard to find.

Everything about the car from its dark blue paint color to the temperature gauge hood ornament and the steam engine is original.

Lemieux skipped the Tune-up event in Clio on Tuesday – the first of five held daily throughout the county – because of rain in the forecast. He also decided not to drive the car to the Tune-up in Fenton/Linden on Thursday but planned to attend the one in Davison on Friday, weather permitting.

Lemieux said he’s wanted a Model A Ford since he was a boy and watched them drive into a gas station owned by his father.