FLINT TWP. — The FBI has confirmed that a knife attack yesterday on a police officer at Bishop International Airport is being treated as an act of terrorism.The victim, Lt. Jeff Neville, was initially listed in critical condition but is now stable and expected to recover. He’s been on the airport force since 2001.FBI spokesperson, David Gelios, in a press conference, identified the attacker as Amor Ftouhi, 50 of Canada, who entered the United States via Champlain, New York on June 16. Investigators do not have further information on why Ftouhi targeted the Flint airport but surveillance shows that he went into an airport restroom before coming out and attacking the officer with a large serrated knife.Neville was reportedly stabbed in the neck but able to wrestle Ftouhi to the ground in the few minutes before nearby airport personnel arrived on the scene to assist in subduing the suspect.Investigators confirmed reports that  Ftouhi yelled “allah ‘Akbar” (God is the greatest)before attacking Neville. Investigators also said he made a statement to the effect of  “You have killed people in Syria, Iraq and Afghanistan and we’re all going to die.”Ftouhi is in custody  and expected to be arraigned in Detroit.In the wake of the attack, Bishop Airport was evacuated and shut down for the second time this month. Inbound planes were allowed to land and passengers disembarked but no departing passengers were allowed in the airport until about 4:15 p.m. when the airport reopened.The FBI investigation is ongoing and anyone with information about the attack or the suspect is asked to contact them at the FBI’s Detroit Field Office at (313) 965-2323 or submit information at tips.fbi.gov. 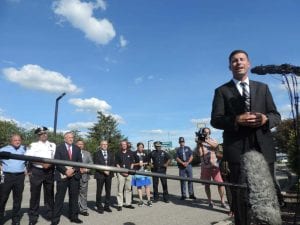