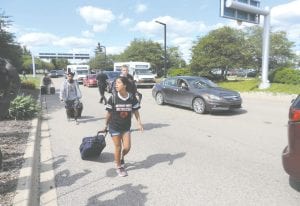 To avoid the ensuing traffic backup when the airport reopened, several passengers walked in with their luggage.

FLINT TWP. — The FBI is investigating a June 21 knife attack on a police officer at Bishop International Airport as an act of terrorism.

The victim, Lt. Jeff Neville, was initially listed in critical condition but underwent immediate surgery and has since been released from the hospital to recuperate at home. He’s been on the airport force since 2001.

“We are investigating this incident … as an act of terrorism,” said David Gelios, FBI special agent in charge of the Detroit Division, in a press conference on the day of the attack.

He identified the attacker as Amor Ftouhi, 49, of Canada, who legally entered the United States via Lake Champlain, New York on June 16.

Gelios said the investigation was in its early stages and they did not know why Ftouhi targeted the Flint airport or if he has ties to this area. He is being viewed as “a lone wolf” who acted alone, was not known to be connected to any terrorist group and was not on the FBI radar screen as a potential threat.

Surveillance showed “that at approximately 8:52 a.m., Ftouhi entered the first level of Bishop International Airport carrying a red duffle and a dark satchel bag. At approximately 9:10, Ftouhi went up an escalator to the second level of the airport. At the top of the escalator, Ftouhi turned left to go to a restaurant. At approximately 9:37:56, Ftouhi left the restaurant carrying both bags. Ftouhi entered a second floor restroom at 9:38:15 and left at approximately 9:38:43 without either bag. At 9:38:48, Ftouhi attacked the officer and was subdued by other law enforcement shortly after” according to the criminal complaint filed in U.S. District Court – Eastern Michigan.

Ftouhi attacked Officer Neville with a 12-inch knife that bearing an eight-inch serrated blade, Gelios said. Neville was reportedly stabbed in the neck but able to wrestle Ftouhi to the floor in the few seconds before nearby airport personnel arrived on the scene to assist in subduing the suspect. Airport Police Chief Chris Miller said he was directly responsible for handcuffing Ftouhi with help from Lt. Dan Owen of the airport fire department and an airport maintenance man. Just before attacking Neville, Ftouhi yelled “Allahu akbar,” which means “God is great” in Arabic, according to court documents. Ftouhi also continued to yell “Allah” during the attack and also asked the officer why he did not kill him, according to the formal complaint. Ftouhi reportedly also made a statement to the effect of “You have killed people in Syria, Iraq and Afghanistan and we’re all going to die.”

The incident happened in the public area outside of the TSA secured area where passengers are screened before entering the airport boarding area.

Ftouhi was cooperative during an FBI interrogation about his motives, Gelios said, declining to elaborate due to the ongoing investigation. He did make it clear that he has “hatred for the United States” among other things, Gelios said. Ftouhi made an initial appearance in Flint federal court last week and was expected to appear again for a detention hearing on Wednesday, June 28. On the day of the attack, Bishop Airport was evacuated and shut down for the second time this month. Inbound planes were allowed to land and passengers disembarked but no departing passengers were allowed in the airport until about 4 p.m. when the airport reopened.

Craig Williams, airport director said that about five departing flights were impacted by the seven-hour shutdown. He also said that security is a “top priority” at the airport, which also was evacuated due to a bomb scare earlier this month.

“We have additional resources in place to enhance security in accordance to our security protocols,” Craig said in a written press statement after the knife attack.

Ftouhi is being charged with a violation of a U.S. code concerning violence at an international airport that could have or did cause injury, Gelios said. The charges carry a statutory maximum penalty of up to 20 years in prison.

The FBI investigation is ongoing and anyone with information about the attack or the suspect is asked to contact them at the FBI’s Detroit Field Office at (313) 965-2323 or submit information at tips. fbi.gov.