FCS names Educator and Employee of the Year recipients 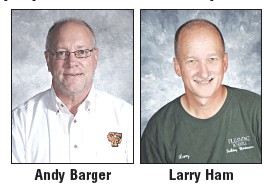 FLUSHING — Flushing Middle School counselor Andy Barger and Flushing High School custodian Larry Ham have been selected as Educator of the Year and School Employee of the Year for 2020.

Barger, who has been with Flushing Community Schools since 1993, started in the district as a science teacher before transitioning to counseling. As a counselor at Flushing Middle School, Barger has been highly regarded by the district for making a positive impact on the students who come to him for guidance.

Barger’s Educator of the Year nomination reads as follows:

“While his (Barger’s) realm is in counseling, he strives to make the most of every student interaction, and endeavors to make a positive difference in the lives of students every day. Whether helping students through conflict, with their social/emotional issues or with coping and resiliency strategies, to helping kids formulate plans for success, he tirelessly contributes to the well-being and betterment of students’ lives.

“From running a highly successful Middle School Summer School program, to touching every student schedule, he (Barger) is truly someone that will do anything and everything to make sure things go the way they are supposed to go.”

“Larry plays an integral role at the high school every day, and he has done so for the last 31 years. There is nothing that has been thrown at him that he cannot handle, and he has kept the building running smoothly no matter what he might walk into on any given day. He is the “go to” for a myriad of building maintenance and custodial issues, and he handles them professionally, thoroughly and with pride knowing that he is relied upon to take care of business. He is great with students, as well as his colleagues. He is a humble leader, doing whatever is asked of him without fanfare. Most importantly, he handles all of his responsibilities with a positive attitude and a true dedication to the success of the high school.”

Barger and Ham will receive their Educator of the Year and School Employee of the Year awards at the Flushing Area Chamber of Commerce’s Annual Awards Banquet, which has been tentatively planned as a virtual event in March.