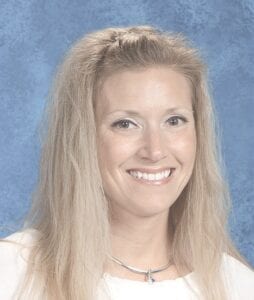 FLUSHING — Flushing Community Schools has chosen Michelle Barrett to be its new Executive Director of Curriculum and Instruction.

Barrett, who has served as the principal of New Lothrop Elementary School since 2014, will be taking her new administrative role at FCS effective July 1. Andrew Schmidt, the current Executive Director of Curriculum and Instruction, will be transitioning to his new role as the district’s deputy superintendent this summer.

Barrett, a Flushing resident for the last several years, said that she is humbled to now be part of the Flushing Community School District in an educational capacity.

“It’s been a longtime dream of mine to be the curriculum director in this community,” Barrett said. “I’ve been super-impressed by the professionalism that the district has offered, and I’m excited to lead the next level of growth in Flushing.”

“While it was clear throughout both the interview and the reference process that (Barrett) has been incredibly successful as a teacher, assistant principal and elementary principal, it was even more apparent that she was exceptionally strong as a curriculum and instructional leader,” Shanafelt said. “She has been successful in rolling out new curriculums as necessary and providing incredibly meaningful (instruction) for her staff.”

Barrett began her career as a kindergarten, first grade and second grade teacher in Cherry Creek, Colorado, before becoming an assistant principal at Newton Middle School in Littleton, Colorado. Upon moving back to Michigan with her family, Barrett served as the New Lothrop Elementary School principal for six years.