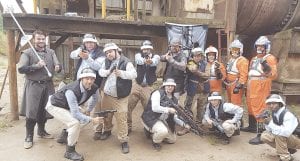 Some of the cast of the Star Wars fan film filmed in Vassar and Brideport. Photo provided

DAVISON TWP. – Mike Millinkov wears many hats, including magician and drone pilot, but now he can say he’s fought in the Galactic War against the evil Empire.

Millinkov spent several weeks recently helping with aerial photography, using his drone, for a fan-made Star Wars film being made in mid-Michigan. An avid Star Wars fan himself, Millinkov said he also filmed some parts in the flick as an extra.

The film is a fan-funded production called “Star Wars: The Blood Crystal” and for those who are Star Wars buffs, the timeline takes place between Revenge of the Sith and A New Hope. It is written and direct- ed by Dark Hoffmann (yes, his real name is Dark) from Frankenmuth. 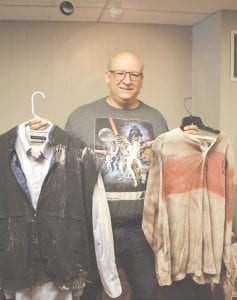 Mike Millinkov shows off some of the costumes used in the production of The Blood Crystal. Photo by Gary Gould

Through the course of production on the movie, he said he was not only an extra and did the aerial shots, but he helped out with sound effects, costume design and filming.

“It was an awesome experience,” said Millinkov, who is also a member of the Magicians Guild and has performed as a magician for several years now.

Hoffman did outside filming at a site in Vassar, while filming other scenes on a soundstage built in a barn in Bridgeport.

Millinkov said he admits at first he thought it would be a couple of guys running around with camcorders, but was surprised it was more of a Hollywood on a small budget production.

“My mind was blown,” he said. “This was low budget, but to me it was more like Hollywood on a smaller scale.”

He said the production is still trying to raise money for the project by having a Gofundme account, auctioning off props from the film and selling t-shirts.

Millinkov said his parts in the film are fighting as a rebel soldier in the battle sequences. These required him to be on set a couple of weekends ago, arriving at 1 p.m. on Saturday and not leaving to go home until 4:40 a.m. Sunday morning.

He said Hoffmann is shooting for completion of the film by year’s end and he said it will likely be split up into three parts and released online. There will be no charge to view the film, since they can’t legally profit off the Star Wars franchise.

Millinkov said he doesn’t think fans will be disappointed at what they’ll see.

“This is a serious movie with a great plot,” he said. “And these were great people. I learned a lot working with the director of photography and with the director, setting up scenes. I made a hundred new friends…everyone was awesome.”

To learn more about The Blood Crystal movie, visit thebloodcrystalfanfilm.com or look for their page on Facebook.