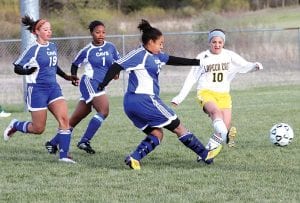 According to a study by Michigan State University, female and younger athletes are affected by concussions to a greater degree.

EAST LANSING— Gender and age are now being taken into account when it comes to athlete concussions after new research from Michigan State University determined that it takes a longer period of time for female athletes and younger athletes to recover from concussions. The study was conducted by Tracey Covassin, who works in Michigan State’s Department of Kinesiology.

“While previous research suggests that younger athletes and females may take longer to recover from a concussion, little was known about the interactive effects of age and sex on symptoms, cognitive testing and postural stability,” commented Covassin. “This study confirms that age and sex have an impact on recovery, and future research should focus on developing treatments tailored to those differences.”

The research that Covassin conducted was funded by a two-year grant from the National Operating Committee on Standards for Athletic Equipment. Covassin’s findings have appeared in the most recent edition of the American Journal of Sports Medicine. More than 150,000 athletic-related concussions occurred between 2001 and 2005 within the ages of 14 and 19. Covassin went onto acknowledge the fact that those figures are likely much higher, as the study was conducted on concussions that were actually report- ed.

“We need to raise awareness that yes, female athletes do get concussions,” added Covassin. “Too often, when we speak with parents and coaches, they overlook the fact that in comparable sports, females are concussed more than males. Younger athletes appear more at risk for second-impact syndrome, where a second concussion can come with more severe symptoms. While it is rare, there is a serious risk for brain damage, and the risk is heightened when athletes are coming back before they heal.”