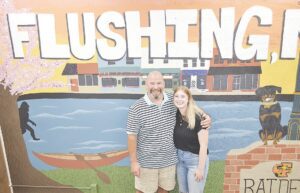 FLUSHING — Throughout most of 2021, recent Flushing High School graduate and art student Emily Harnden worked diligently to create a memorable portrait of her hometown.

After months of hard work— and a whole lot of paint — Harnden has finished a huge mural depicting downtown Flushing in a setting fit for a postcard.

Harnden’s project, a 13-foot by 10-foot mural cast on a cinderblock wall, is now on display at Cary Ann’s Hallmark Shop in Flushing. The painting features several of the city’s landmarks and cultural symbols, including Flushing’s iconic clock that stands on the corner of Main and Maple streets.

Kyle Raup, owner of Cary Ann’s Hallmark, approached Harnden earlier this year to see if she could create a mural in his store that would commemorate Flushing and its visual heritage. He said the artwork has already generated positive and nostalgic responses from residents.

“People have remarked about how detailed the painting is, especially with the clock and the shades of color Emily used for the buildings,” Raup said. “She did a great job and spent a lot of time and effort.”

Harnden’s seven-month project started in February with sketches of the mural, then accelerated with the first paint applications in March and April. Over the summer months, she spent many hours tweaking her designs and painting over the cinderblock wall’s rough, uneven texture.

To capture a sample of Flushing’s appearance and natural appeal, Harnden portrayed several prominent downtown businesses in the painting, along with the Flint River, a stylized cherry blossom tree and a rowboat to signify the city’s recreational offerings. She also incorporated the Flushing Community Schools Raider logo into the “City of Flushing” wall that greets visitors heading downtown near the Main Street bridge.

In addition to displaying Flushing icons, the mural pays homage to community photographer Gary Nickel, who passed away in December. Nickel is represented by a camera that’s positioned on top of the Raider logo wall.

Raup’s beloved Rottweiler Zoey, who died recently at the ripe old age of 16, is also portrayed—panting happily underneath the Main Street clock.

Customers will also notice a shadowy figure slouching out from behind the cherry tree in the mural.

“We sell a lot of ‘Sasquatch Research Team Club’ gear at the store, so I figured it would be fitting to have a sasquatch in the painting,” Raup said. “It’s a good conversation starter.”

Harnden, who was an Honors art student at FHS, said that she enjoyed tackling her first large-scale mural project and bringing Raup’s vision to life.

“This is one of the first artworks that I really sketched out and where I really thought hard about what I wanted to portray and what colors I should add or mix,” she said. “It was fun to come in on my own time and create something for the community.”

Harnden, 18, will attend Western Michigan University this fall to pursue a major in interior design.

For Raup, the mural is also a gift to the residents of Flushing who’ve supported him during the COVID- 19 related shutdowns and health concerns he’s dealt with after having a stroke last year.

“This community is awesome,” he said. “I’ve been through a lot, and the people have been very good to me. I can’t imagine living anywhere else.”