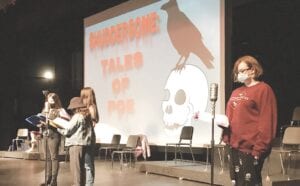 “Shuddersome: The Tales of Poe,” a theatrical adaption of Poe’s works by Lindsay Price, will be performed at the Flushing High School auditorium on Oct. 30 at 7 p.m., Oct. 31 (Halloween Day matinee) at 2:30 p.m. and Nov. 1. at 2:30 p.m. The play will incorporate five of Poe’s classic stories, including “The Tell- Tale Heart,” “The Raven” and “The Masque of the Red Death.”

Due to COVID-19 concerns, the FHS theatre program had to find a script that would allow cast members to stay masked and socially distanced, while still providing an entertaining show for the audience. Enter “Shuddersome: Tales of Poe,” a play filled with spine-tingling supernatural themes produced in the format of an old-fashioned “radio-style” show.

Lynda Gibson, director of “Shuddersome: Tales of Poe,” said that the production will mostly employ stage reading from the actors.

“This particular script lends itself to being performed with minimal blocking (stage movement) but still gives our students the opportunity to perform on stage and still be fully masked,” she said. “We’ve focused on creating characters and the mood for each story with voices.”

While concentrating on the darker themes of Poe’s works, “Shuddersome” also includes a rare comedic story from Poe entitled “Lionizing,” which will be featured between “The Tell-Tale Heart” and “The Bells.”

After a brief bit of levity, the show will finish on a dark but thrilling tone with “The Raven” and “The Masque of the Red Death.” Audience members will be guided through the play by Rosalie Poe—Edgar Allan Poe’s half-sister—and the Shudders, a “Greek style chorus” that will provide commentary throughout the production.

Gibson said that her students are eager to perform in front of an audience for the first time since the COVID-19 pandemic hit in March.

“Our students really missed being able to participate in an activity they love to do, and I wanted to provide them with that opportunity as safely as possible,” she said. “Picking a show that could be performed more as radio/reader’s theatre gave me a lot of flexibility on how our final production could be presented: from having to create an entirely virtual production, to being able to have a live show with a limited audience.”

Theatregoers will be required to wear masks, and attendance will be limited and contained in “bubble” style seating areas. Tickets for “Shuddersome: Tales of Poe” are $5 and must be purchased with a credit or debit card online at whtauditorium.ludus.com/. No cash purchases will be accepted at the box office.