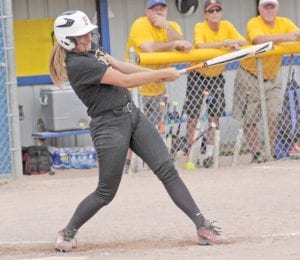 FLINT – A three-run rally in the fifth inning gave the Black team the lead for good and keyed a 7-3 victory over the Gold squad in Monday night’s Bruin Club All-Star Softball Game at Whaley Park.

The Black went into the fifth trailing 2-1 but strung together four straight hits to take a 4-2 lead. Flushing’s Maddy LaFramboise started the rally with a leadoff single, and two batters later Raiders teammate Reilly LaDuke lashed a two-run triple over the center fielder’s head for a 3-2 lead. LaDuke then came home on a single.

Swartz Creek pitcher Madisen Henry helped make the lead stand up and was named Most Valuable Player for the Black team. Durand’s Lauren Pletscher was MVP for the Gold team.

The Gold had taken a 2-0 lead in the second inning. The Black cut it to 2-1 in the top of the fourth as Atherton’s Tatum Lambert and Swartz Creek’s Ella Sinclair lashed back-to-back singles. The Black later had runners at first and third, but a double steal attempt was foiled when the Gold infield threw home to nail the runner for the third out.