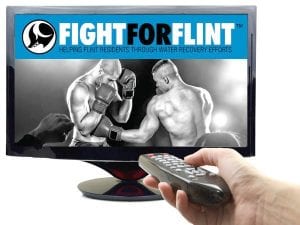 FLINT — Everyone knows Flint is a tough city. They’ve never had it easy. They’ve had to work, to fight, to retain their pride and their place in the world. And the water crisis certainly hasn’t changed that. Which is precisely why Fight for Flint, a professional boxing event coming to the Dort Federal Credit Union Event Center, is so important.

Catholic Charities of Shiawassee & Genesee Counties, along with professional boxing promoter Don Elbaum, Flint and Genesee Convention and Visitors Bureau, and many others, have teamed up to present Fight for Flint. The event will be the first world championship fight in Flint since 1947, when legendary featherweight boxer Willie Pep defeated Jock Leslie in the 12th round of a world title bout that drew more than 10,380 fans to Atwood Stadium.

Elbaum, who has been promoting fights for more than four decades, will bring his expertise and a number of his friends and acquaintances to the event in order to help raise money for Catholic Charities and the water crisis. Catholic Charities is an organization devoted to serving the community, assisting and empowering individuals and families in need, and increasing health and independence throughout the area. It is the goal of Catholic Charities to “provide help and create hope.”

“Fight for Flint is so good for boxing and it’s so good for the area,” said Elbaum. “We’re trying to make this thing a monster and fill the stands with people in order to help.”

“Flint needs our help, and Catholic Charities and other partners are here to offer it,” said Vicky Schultz, the CEO of Catholic Charities. “Everyone everywhere needs to know about the hardship we are experiencing here and all the efforts being made by so many to provide help and hope for the people of Flint.”

Fight for Flint is set for 7:30 p.m. Saturday, Oct. 1 at the Dort Federal Credit Union Event Center. Tickets for general admission will be $25 in advance and $30 at the door. For tickets or for more information, please visit www.fightforflint.org. Donations can be made to Catholic Charities of Shiawassee and Genesee Counties, located at 901 Chippewa St. in Flint. — Alex Petrie