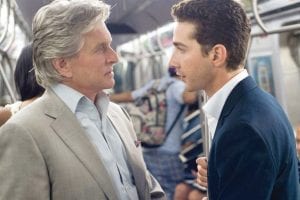 In this animated kiddie movie, sometimes the wolves look like wolves and sometimes they look like humans. It’s the story of the emerging love between Humphrey (voiced by Justin Long), a goofball omega wolf, and Kate (Hayden Panettiere), a foxy alpha wolf he’s been crushing on since he was a pup. Alphas and omegas can’t marry, though, and, besides, Kate has been promised to an alpha wolf from another pack to settle a turf war. It’s an unexceptional 3-D offering, which is also available in 2-D for those looking to avoid paying surcharges for lowbudget animation. PG (rude humor and mild action). 1:27. 1 1/2 stars. — G.W.

The story of a girl who gains a reputation as her high school’s No. 1 skank after her white lie about a boring weekend, “Easy A” is neither as smart nor as funny as it wants to be. Much of what passes for fresh in this “Scarlet Letter” update doesn’t bear closer inspection, yet the movie is not without its pleasures, chief among them the potentially starmaking lead performance by Emma Stone. Stone’s character embraces her shame and the pretend shenanigans ensue. The movie is up-to-the-minute with text gossip and webcam narration, but a bit over the top. PG-13 (teen sexuality, language and some drug material). 1:30. 2 stars. — S.L.
Resident Evil: Afterlife 3D

Director Paul W. S. Anderson is intent on being the worst moviemaker in the biz. His latest installment in the “Resident Evil” franchise begins just past the finale of the last film and ends with yet another cliffhanger. Alice (Milla Jovovich) is still stalking the evil Umbrella Corp., the folks who created the virus that made her super-strong and everybody else the Living Dead. Anderson stages and shoots like it’s a walk-through at the first day of rehearsals. The 3-D is mainly used to hurl shell casings into the audience. R (strong violence and language). 1:33. 1 star. — R.M.

This frantic, entertaining heist film is noisy and unsubtle, but it gets the job done. Top-billed Matt Dillon plays a detective who’s chasing a quintet of stylish hoodlums played by the likes of Idris Elba, Tip “T.I.” Harris and Chris Brown. They’ve been persuaded by a former colleague, just out of the clink, to blow up part of a downtown LA street and boost an armored truck’s worth of banknotes. It’s an unpretentious time-waster. And I rather liked it. PG-13 (intense sequences of violence and action, a sexual situation/ partial nudity and language). 1:47. 2 1/2 stars. —

The new George Clooney film “The American” is pretty. It’s also pretty dour, even with all the Italian mountain scenery, used here as a backdrop to the tale of an old school, one-at-a-time weapons manufacturer trying to get out of the business he’s in, by way of One Last Score. Dutch director Anton Corbijn exhibits an extreme sense of visual control, mirroring Clooney’s performance, while giving the film a sparse, almost gray feeling. The film’s visuals are undeniable. So is its destiny as an audience-divider. R (violence, sexual content and nudity). 1:35. 2 1/2 stars. — M.P.

A frustrating movie, albeit one with a lot of laughs, “The Other Guys” stars Will Ferrell and Mark Wahlberg as New York Police Department desk jockeys who get a chance to transform themselves into high-risk, maximum-destruction superstars, chasing down a Bernie Madoff-type scam artist and destroying half their city in the process. While the filmmakers have overloaded the narrative, stretching it 20 minutes beyond its practical use, Ferrell is enough of a real actor to sell the stupidest stuff with the straightest of faces. PG-13 (crude and sexual content, language, violence and drug material). 1:47. 2 1/2 stars. — M.P.

Worth seeing for its actors, “The Town” is violent but softhearted, and clearly digs the grungy allure of its Boston criminal world, where the bank robbers disguise themselves as ghoulish nuns. This is a onelast job movie. Doug (Ben Affleck) angles to make one last score with the gang and go clean. Hotheaded Jem (Jeremy Renner) wants the heists to continue. Everything gets complicated when a hostage (Rebecca Hall) doesn’t recognize her captors and becomes involved with Doug. All in all, an enjoyable film, if a tad too long. R (strong violence, pervasive language, sexuality and drug use). 1:47. 2 1/2 stars. — M.P.