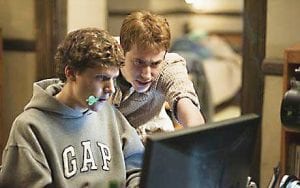 THE SOCIAL NETWORK — Jesse Eisenberg and Andrew Garfield star in the story of the creation of Facebook.

In this animated kiddie movie, sometimes the wolves look like wolves and sometimes they look like humans. It’s the story of the emerging love between Humphrey (voiced by Justin Long), a goofball omega wolf, and Kate (Hayden Panettiere), a foxy alpha wolf he’s been crushing on since he was a pup. Alphas and omegas can’t marry, though, and, besides, Kate has been promised to an alpha wolf from another pack to settle a turf war. It’s an unexceptional 3-D offering, which is also available in 2-D for those looking to avoid paying surcharges for low-budget animation. PG (rude humor and mild action). 1:27. 1 1/2 stars. — G.W.

The story of a girl who gains a reputation as her high school’s No. 1 skank after her white lie about a boring weekend, “Easy A” is neither as smart nor as funny as it wants to be. Much of what passes for fresh in this “Scarlet Letter” update doesn’t bear closer inspection, yet the movie is not without its pleasures, chief among them the potentially star-making lead performance by Emma Stone. Stone’s character embraces her shame and the pretend shenanigans ensue. The movie is up-to-the-minute with text gossip and webcam narration, but a bit over the top. PG-13 (teen sexuality, language and some drug material). 1:30. 2 stars. — S.L.

This shrewd American remake of the Swedish original novel and film, “Let the Right One In,” follows a young girl vampire, Abby (Chloe Grace Moretz), whose budding friendship with a severely bullied boy leads to a gory confrontation with his tormentors. Abby’s father, played expertly by Richard Jenkins, must keep her well fed with human blood, but things start getting out of hand when Abby ventures out on her own. The entire cast is strong here. And while the original was a very good thriller, the new one is simply a good one. R (strong bloody horror violence, language and a brief sexual situation). 1:55. 3 stars. —

Director Paul W. S. Anderson is intent on being the worst moviemaker in the biz. His latest installment in the “Resident Evil” franchise begins just past the finale of the last film and ends with yet another cliffhanger. Alice (Milla Jovovich) is still stalking the evil Umbrella Corp., the folks who created the virus that made her super-strong and everybody else the Living Dead. Anderson stages and shoots like it’s a walk-through at the first day of rehearsals. The 3-D is mainly used to hurl shell casings into the audience. R (strong violence and language). 1:33. 1 star. — R.M.
The Social Network

At once stealthy and breathlessly paced, “The Social Network” scoots at a fabulous clip, depicting Facebook founder Mark Zuckerberg (Jesse Eisenberg) made his billions. When a drunken hack job of Harvard’s student directory turns into a social networking collaboration called “thefacebook,” Zuckerberg takes the idea and his mad programming skills to dot.com, California, leaving his collaborators in the dust. Director David Fincher brings his deft and moody touch, giving us one of the most stimulating films of the year. PG-13 (sexual content, drug and alcohol use, language). 2:00. 3 1/2 stars. — M.P.

Worth seeing for its actors, “The Town” is violent but softhearted, and clearly digs the grungy allure of its Boston criminal world, where the bank robbers disguise themselves as ghoulish nuns. This is a onelast job movie. Doug (Ben Affleck) angles to make one last score with the gang and go clean. Hotheaded Jem (Jeremy Renner) wants the heists to continue. Everything gets complicated when a hostage (Rebecca Hall) doesn’t recognize her captors and becomes involved with Doug. All in all, an enjoyable film, if a tad too long. R (strong violence, pervasive language, sexuality and drug use). 1:47. 2 1/2 stars. — M.P.