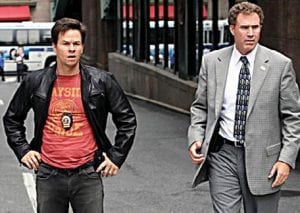 The Other Guys — Mark Wahlberg and Will Ferrell

“Cats & Dogs” is the latest movie to be unnecessarily converted to 3-D, which means that if mom and dad want to take the kids to see the fur fly this weekend, they’re going to pay a surcharge to receive absolutely nothing of value in return. This sequel is better than the original, but so is a rabies shot. It’s a send-up of James Bond spy flicks with cats and dogs joining forces to thwart hairless cat Kitty Galore (Bette Midler) and her diabolical plans to rule the world. The result is cute, but audiences are better off waiting for the DVD release. PG (animal action and humor). 1:27. 1 star. — G.W.

This is the tale of a college-bound sailing phenom, Charlie (Zac Efron), whose brother, Sam, 11, is killed by a drunk driver. Charlie’s life derails; he cancels plans to attend Stanford and becomes a hermit groundskeeper at the cemetery where Sam is buried. Supernatural things happen there, like Sam showing up with his baseball glove and ball in hand. Eventually, Charlie’s onetime sailing rival Tess (Amanda Crew) shows up to gum up the works. Unfortunately, this supernatural melodrama, much like its story, is icky. PG-13 (language, some sexual references, an intense accident scene and sensuality). 1:40. 1 1/2 stars. — M.P.

An agreeable jumble, the animated feature “Despicable Me” sells its 3-D in ways you wouldn’t call sophisticated or witty. With a heavy Slavic dialect, Steve Carell voices the “Me” of the title, a sallow-complexioned baddie named Gru, who plans to steal the moon by way of a “shrink ray.” Along the way he grapples with his mother (Julie Andrews) and his nemesis,

Vector (Jason Segel). The film finds its heart when Gru adopts three adorable orphan girls, and it’s by taking the “heart” part just seriously enough, that this movie saves itself from itself. PG (rude humor and mild action). 1:35. 2 1/2 stars. — M.P.

This remake of a French farce has a lot of funny people going for it. In it, a wealthy businessman hosts a monthly soiree for which his employees must bring an idiot to dinner, and the best idiot wins. Tim (Paul Rudd) feels conflicted about this, but into his life (and off the front of his car) bounces a pluperfect dolt, played by Steve Carell. While cast members like Jemaine Clement and Zach Galifianakis play well, this schmucked-up American edition does the chortling for us and then scolds us for laughing. Or, in my case, not. PG-13 (crude and sexual content, some partial nudity and language). 1:54. 1 1/2 stars. —M.P.

“Salt” isn’t trying to reinvent anyone’s wheel. It’s quick (under 90 minutes minus credits) and, like the condiment whose name it shares, director Phillip Noyce’s run-like-hell thriller starring Angelina Jolie satisfies a basic human taste — something to go with the popcorn. I liked it. It knows what it’s doing. Jolie plays a supertough superspook confronted one day with a Russian defector who accuses her of being a sleeper agent in the employ of Russians dreaming of oldschool world domination. PG-13 (intense sequences of violence and action). 1:33. 3 stars. — M.P.

Entering NYU, Moose finds himself torn between two worlds, one respectable and relatively dance-free, the other filled with “b-boys, tickers, tappers, voguers and poppers.” The movie is like watching a musical from the early ’50s but in 3-D, combining hip-hop battles with numbers paying homage to old-style classics. This movie is ridiculous. Of course. But it boasts a generous exuberance and, as entertainment products go, it’s surprisingly sweet. It requires only that you set your expectations correctly. PG-13 (brief strong language). 1:37. 3 stars. — M.P.

A frustrating movie, albeit one with a lot of laughs, “The Other Guys” stars Will Ferrell and Mark Wahlberg as New York Police Department desk jockeys who get a chance to transform themselves into high-risk, maximum-destruction superstars, chasing down a scam artist and destroying half their city in the process. While the filmmakers have overloaded the narrative, stretching it 20 minutes beyond its practical use, Ferrell is enough of a real actor to sell the stupidest stuff with the straightest of faces. PG-13 (crude and sexual content, language, violence and drug material). 1:47. 2 1/2 stars. — M.P.

In “The Sorcerer’s Apprentice,” loosely based on the Mickey Mouse segment in “Fantasia,” Nicolas Cage plays Balthazar, a good sorcerer who can live forever and is trying to protect modern day New York City and environs from the ravages of bad sorcerers played by Alfred Molina and Alice Krige. Once Balthazar presses young Dave (Jay Baruchel) into apprenticeship, the duo and Molina shoot fire-jets and balls of energy at one another’s heads. PG (fantasy action violence, mild rude humor and brief language). 1:49. 2 1/2 stars. — M.P.