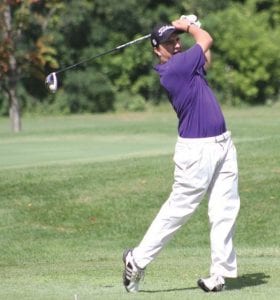 Gabe Schiller tees off in Monday’s first round on his way to a 1-under-par 71.

The three-day tournament started Monday, with Schiller scoring two eagles en route to a 1-under-par 71 for the first-round lead. He matched that score Tuesday for a 142 total, and Ben Zyber jumped from third place into the second spot with his second straight 75 for a 150 total that beat Grand Blanc’s Jordan Harris by two strokes. Alec Cramer was fourth in the 10-man field with 73-81-154, and Creek senior Jack Weller placed fifth with 78-78-156.

Haylee Zyber dominated stroke play in the girls’ field with 76-77-153 to finish 12 strokes ahead of Wolfe. Davison grad Andrea Richards was third with 87-84-171, and Fenton’s Taylor Przybylowicz and Lapeer West’s Caycee Turczyn tied for fourth at 173. The rest of the girls’ scores were Mikayla Gilman 178, Morgan Storer 179, Kristin Loiselle 180 and Morgan Zloto 183.