Replacement soon to be promoted 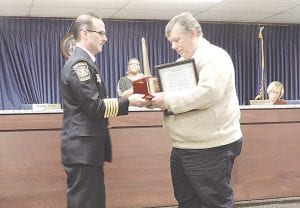 The township board and fire department paid tribute and held a cake reception for retiring Fire Captain Gary Borse, who was honored for 35 years of service. He was presented with a proclamation and an engraved statuette topped by an authentic fire hose nozzle. His family was present including his wife Kimberly and their children.

FLINT TWP. — The township board of trustees honored a retiring fire captain and laid the groundwork for his successor.

The board authorized Supervisor Karyn Miller to request from the Civil Service Commission the name of the highest scorer on a recent test for the captain position. Chief Thomas Stadler said that four eligible captains took the test. The name of the top scorer will likely be presented at the next township board meeting on Feb. 5, he said.

The board also took time to pay tribute to outgoing Captain Gary Borse, who served the township for more than 35 years. He began his service as an on-call firefighter on March 18, 1982 and was promoted to full-time on April 20 1992, according to a proclamation presented to him.

Borse was promoted to Lieutenant on Jan. 23, 1995 then to captain on January

1, 1998. He spent his career as a firefighter serving from all three fire stations where he held the position of house officer for many years. He also chose to further his firefighting career by attending many training opportunities including Certified Fire Investigators, Hazardous Materials, Terrorism Awareness, Confined Space and Clandestine Drug Lab.

In his remarks following the presentation, Borse said he will always cherish his time with the fire department and misses it already.

With Borse’s retirement, Chief Stadler said the department is in transition with new leadership and personnel. Part of that transition includes replacement of vital positions in the rank structure, he said The Captain position is vital because that person conducts fire inspections and oversees activities such as fire prevention and hose testing. The captain also provides command-level direction for emergency incidents and oversees the department when the Chief Officer is absent. Funding for the position is in the 2018 fire budget, he said.

The board voted five to one to approve the request to the Civil Service Commission for the name of the eligible candidate. Township Supervisor Karyn Miller was absent due to illness and Trustee Barb Vert cast the sole no vote, citing her preference to pursue recommendations from a Feasibility Study the board commissioned in 2012 to explore department consolidation with Mundy Township and Swartz Creek.