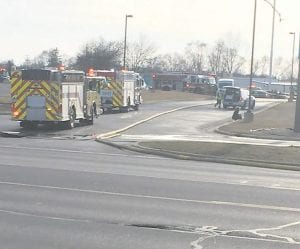 Another look at the fire at Discount Tire. Photo by Calvin Brown

Flint Township Fire Chief Thomas Stadler said firefighters arrived at the scene at about 5:27 p.m. March 27, about four minutes after getting the call. Heavy black smoke could be seen from Interstate 69, and windy conditions stoked the flames coming from the roof of the building. Stadler said the fire started in a storage area that held more than 2,000 tires and 300 to 400 custom wheels.

“An employee discovered the fire,” Stadler said. “Nobody had been back there for two to three hours. He saw smoke in one of the doorways and found a very large fire on the second level.”

Firefighters were able to contain the blaze in roughly a quarter to a third of the building. No cost estimate for the damage is available at this time, but Stadler said the tire storage area was a total loss.

“We’re still waiting for corporate to give us a loss estimate, so not only are we in the investigation mode, we’re still in the information-gathering mode,” he said. 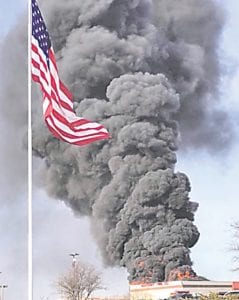 There were customers and employees in the building when the fire broke out, but no one was injured. Stadler said one building nearby was evacuated because of the heavy, toxic smoke.

“Because of the amount of damage and instability of the walls, we were not able to get in there and investigate in the earlier stages of the fire,” Stadler said. “We brought in an excavator to knock down walls and pull out roof trusses that fell and were laying on top of burned rubber from the tires. That makes our investigation very, very challenging.”

The cause of the blaze is still undetermined, but Stadler said there is no reason to believe the fire was suspicious in nature. The heavily damaged business remains closed while undergoing repairs.

“At the end of the day, I’m very pleased and proud of our personnel on the job,” Stadler said. “They did a fantastic job of limiting the damage, and there were no injuries, so that was key.”