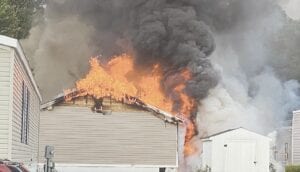 Fire was visible from a home on Van Buren Court in Broadview Estate Mobile Home Community as firefighters worked to bring the blaze under control, June 5. Photo provided

RICHFIELD TWP. — A manufactured home on Van Buren Court in Broadview Estates, at Richfield Road and M-15, was mostly destroyed and a couple of surrounding mobile homes were damaged during at blaze, June 5.

The Davison-Richfield Area Fire Department responded to the fire at about 7:15 p.m., but they’d already been on that same street earlier in the day when a car fire was reported. Chief Brian Flewelling said the two blazes were unrelated.

The more serious fire took place in the mobile home and Flewelling said no one was injured, but the structure was destroyed, as well as a shed, where the fire is believed to have started. The heat from the fire also damaged to adjacent mobile homes.

“It started out in shed and spread to trailer, and did damage to two other homes,” said Flewelling. “There were no injuries…despite the heat that day, everyone was just fine.”

He said the department spent three hours at the scene fighting the fire. They received assistance from the Forest Township Fire Department, while Atlas Township fire fighters manned Station No. 1 in their absence.

Flewelling said the cause of the fire has not been determined and is still under investigation.