Fire department gains one, loses one 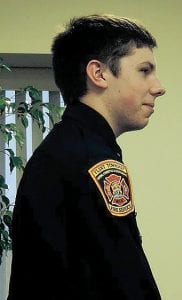 Kevin Borse is hired in as a new on-call firefighter.

Kevin Clary, a 10-year member, became the most recent long-timer to resign. He submitted his resignation to the township board during public comment. Clary said he would discuss his reasons privately to honor an agreement made with the board not to air grievances publicly.

But Clary’s letter of resignation, effective April 21, stated that it is “due to the lack of leadership and communication and the disorganization of the fire department and the (un) willingness of the township board to step forward (and) resolve many problems brought to them.”

Clary was president of the On-Call Firefighters Union.

“It’s with a heavy heart that it’s come to this,’’ his letter said. The board accepted it without comment.

On a happier note, the board approved the hiring of Kevin Borse, as a probationary Michigan Certified Trained on-call firefighter.

Borse is the son of Capt. Gary Borse firefighter who was present. He said he was “very proud’’ to see his son following in his footsteps but joked that it also made him “feel old.”

He also boasted that his son finished third in his class.

Trustee Frank Kasle asked Fire Chief John Ringwelski for an update on the goal to rebuild the on-call fire staff.

Applications are available on the township website under fire department. They also can be obtained at Fire Station #1, 5331 Reuben Street, M-F.8 a.m. to 3:30 p.m.

No fire service experience is necessary but is preferred.