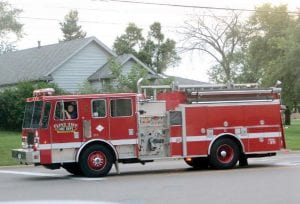 The township fire department is seeking bids to replace one of its older pumper trucks.

FLINT TWP. — The township board has authorized the fire department to seek bids to buy a new pumper truck.

Bid specifications and forms can be picked up from the clerk at the township hall, 1490 S. Dye Road, and are due by 11 a.m. on Wednesday April 13, according to a posting on the township website. The winning bid may be awarded at the regular meeting of the Flint Township Board of Trustees on Monday, April 18.

The truck purchase is a budgeted expense for 2016.

The truck is needed to maintain a sound fleet and will replace an older truck with maintenance issues, said Michael Burkley, assistant fire chief.

He said that a committee of fire fighters came up with the specifications for the new truck which will not have a lot of the usual bells and whistles.

The truck will be red but emphasis was placed on “a functional truck to help them fight fires,” he said.

The department currently has two trucks purchased in 1981, one bought in 1996 and three bought in 2008, Burkley said, adding that they will begin selling off the older trucks after the new arrives. Some of the aging trucks have required constant and costly repairs, he said. But design defects in one of the newer trucks is causing the most problems. Burkley said he is trying a new staggered purchasing schedule to buy a new truck every two years or so instead of buying them all at once in hopes that in the future they all will not wear out at the same time.

Burkley said he’s had preliminary estimates that a no-frills truck will cost about $470,000 but neighboring departments have spent up to $650,000 on similar trucks with embellishments.

“We’re not getting all that,’’ he said. “We looked at what’s practical for us.”

The truck will be placed at station three on Bristol Road, which is the most active of the township’s three fire stations.

Asked about manpower, Burkley said another reason they opted for a less flashy truck is because it needs fewer firefighters to run it. The township board voted 5-2 in favor of Burkley’s request to seek bids to buy the truck. Trustees Frank

Kasle and George Menoutes cast the opposing votes. Kasle said he wanted more assurances about having adequate staffing before voting to spend a lot of money to buy a new truck.