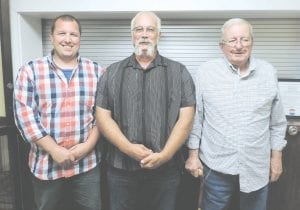 Like father, like son applies to three generations of firefighters in the Rowley family. Former Fire Chief Don Rowley (right) with his son Mark, (middle) a retired firefighter and his grandson Mark Jr, who was scheduled to be sworn in this morning as a fulltime firefighter.

FLINT TWP. With his swearing in on Thursday as a full-time firefighter, Mark Rowley Jr. will be following in the footsteps of his father Mark Sr., who served the department for 25 years, including five as assistant chief; and those of his grandfather Don Rowley, who served 33 years, including 12 as chief.

“Three generations from one family serving to protect the safety and welfare of residents, business owners and visitors to the township is unprecedented and not something we are not likely to see again,” said Township Clerk Kathy Funk, in a memo to the township board.

In another rarity, the township board approved 6-1, offers of full-time employment to Rowley Jr.;, Jonathan Colbeck and Gerald Ruby Hiring full-time firefighters is “something that has not happened in more than 15 years,” Funk noted. Most of the department is made up of on-call firefighters.

Fire Chief Thomas Stadler pointed out that between his recent promotion and some pending retirements, the department has been operating at a low full-time staffing level. All three positions were budgeted for 2017. The names of these candidates were provided by the Civil Service Commission. All three met requirements to become probationary employees.

Colbeck was most recently employed as a full-time firefighter for the city of Jackson and before that was an on-call firefighter and lieutenant with the Delhi Township fire department for more than nine years, Chief Stadler said

Ruby has served as an on-all firefighter for Flint Township for more than 21 years.