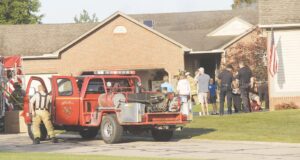 This condo in Forest Creek Estates, off Richfield Road and M-15 caught fire Sept. 3. The homeowner was injured in the blaze. Photo by Gary Gould

RICHFIELD TWP. — A 70-year-old Richfield Township man was injured Sept. 3 during at fire at his home on Spruceridge Court in the Forest Creek Estates condominium community off Richfield Road, just west of M-15.

Davison-Richfield Area Fire Chief Brian Flewelling said his department was called to the report of a bedroom fire at the Spruceridge Court address at about 8:15 a.m.

The fire caused extensive damage to the bedroom where it is believed to have started, which is also where the victim was found. Flewelling said he did not know the extent of the man’s injuries, but he said he did sustain some burns.

There were also police officers from Richfield Township and the City of Davison present, along with an ambulance from MedStar.

Flewelling said there was smoke damage throughout the structure. No one else was injured. The cause of the fire remains under investigation.